1, Montreal Gazette, a fully paid member of the government-Media complex, now does “anti-journalism”

2. James Cameron and Anjem Choudary on the exact same side of the BREXIT issue, except Choudary is honest about his reasons.

“If you want my view on it, I think Britain will be worse off,” Mr. Choudary (pictured above) told Breitbart London.

“I think that [leaving the EU] is something that is probably not in our advantage from a Muslim perspective,” he added.

The radical preacher rose to prominence as the head of Al-Muhajiroun and then Islam4UK – both banned Salafist groups – and for his provocative anti-Western views.

UK Prime Minister Cameron: ‘Brexit’ would be bad for Israel

British PM tells Jewish voters his gov’t won’t be able to push back against anti-Israel sentiment in the EU if it votes to leave this week.

The interesting thing about that is, the European Union has harsh policies about labeling products made in Judea and Samaria in order to make boycotts of Israeli products easier. Hungary specifically refused to adopt these EU measures calling them what they are. Antisemitic. Which makes what Cameron said a lie of sorts.
3. People in Quebec shamelessly waste a perfectly good pig’s head by leaving it at a mosque. 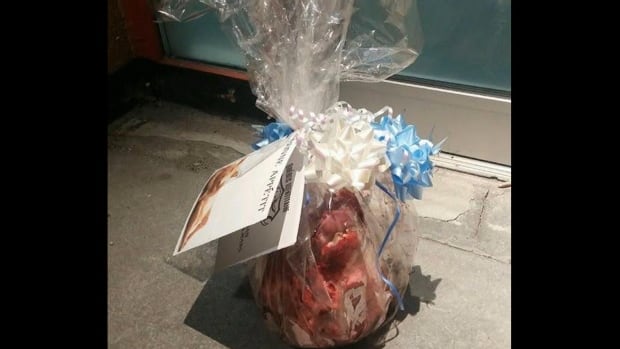 In the middle of the Muslim holy month of Ramadan, a regular at a Quebec City mosque finished a prayer in the early hours of Sunday only to find a pig’s head at the doorstep as he was leaving.

The package, found in front of one of the doors of the Islamic cultural centre of Quebec City around 2:30 a.m., was accompanied by a note: “Bon appétit.”

A well-known restriction in the Islamic faith, the consumption of pork is prohibited in the Qur’an.

“It is a waste of time, money and energy. We have high-definition cameras. We will certainly find the person who did this,” said the president of the centre, Mohamed Yangui.

4. Here is a video of what seems to be a little passion play by Gazanians. It is from April this year but made fresh headlines today in the DM as it seems that this group of actors is funded by Jeremy Corbyn, leader of the British Labour Party.

Well. I guess you can’t say that Labour doesn’t support the arts.

Thanks to CB Sashenka for the translation.

The difference of course in this passion play, is that muslims stab and kill Jews instead of Romans killing a Jewish man and then blaming it on the Jews. Longer version of this al fresco production at the DM link.

5. Video of group of Muslims refusing to stand for the US national Anthem is apparently going viral.

WATCH: Muslims laughing while refusing to stand for our National Anthem

They hate our country

Lt. Col. Tony Shaffer was a member of the military intelligence operations in the early days of the war in Afghanistan and chronicled his early efforts against the Taliban and Al Qaeda following the terror attacks of 9/11 in his book, Operation Dark Heart.  He is a frequent guest on cable news and has an enormous wealth of sources in the US intelligence community.

Friday morning, he joined me and co-host Brian Wilson on our morning radio program on WMAL in Washington DC to comment on CIA Director John Brennan’s remarkable testimony Thursday on Capitol Hill detailing how ISIS is targeting the refugee and open borders to infiltrate our country.

“It’s gotten so bad they can’t cover it up anymore,” Shaffer said of Brennan’s testimony which reinforces the opinions of many critics of Obama’s failed policies in the Middle East. “I think some of these guys recognize that tying their future to the White House and the complete – I’ll just say it – lies that come out of the White House is going to be detrimental to their political future,” Shaffer added.

7. Islam has ‘no place’ in my country, says next EU president Slovakian Prime Minister Robert Fico is one of the most outspoken European leaders on the subject of Muslim immigration and is also known to hold the Islamic faith in barefaced contempt.

US should consider more racial profiling of Muslim Americans: Trump

“Islam has no place in Slovakia,” Fico told reporters in May. Warning that “migrants change the character of our country,” Fico declared he wouldn’t allow such change to affect his nation, implying an adverse, “Islam-driven” change.

(Anyone who does not hold Islam in “barefaced contempt” has not been paying attention, or is Muslim)

Thank you Buck, M., Wrath of Khan, Maria J., CB Sashenka and many more, There will also be more coming soon, including quite a stunning video from Germany. Make sure its ben a while since you have eaten before you watch this one.

4 Replies to “Anti-journalism in Que. Choudary and Cameron bedfellows on BREXIT and more: Links 1 on June 21 – 2016”