This is the fourth and final installation of Matt Bracken’s thriller, Piss Christ? Piss Koran! A work of fact not yet happened, which needed to be done.

Thanks Matt for the story and Gates of Vienna for the images:

Part I can be read here

Part III for those who haven’t read it, is here

A sample of part IV 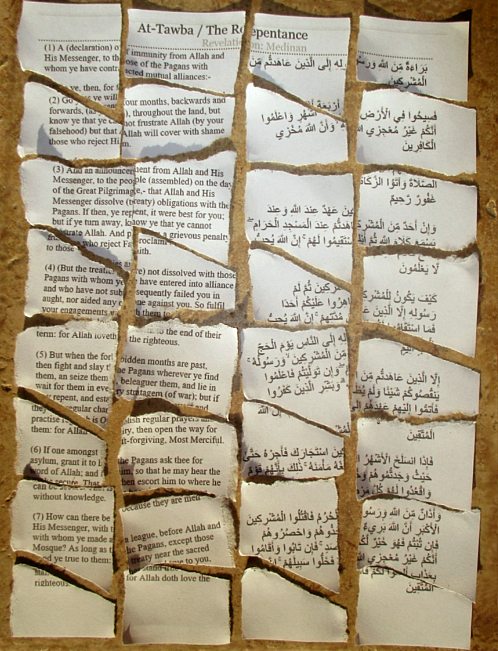 “Your call, smart guy.” The phone connection made a click and the line went dead.

Mike wasn’t a kid. He knew that he wouldn’t live forever. He’d had enough brushes with death to understand that a healthy old age was not guaranteed in the contract. He’d been standing next to men who had stepped the wrong way, and fallen. He’d helped pull a man’s body off a concrete footer where he’d been impaled on an uncapped rebar stake. Just two stories down, and dead as a nail. Laughing and joking the minute before. A paragraph in the back of the paper, if that. There but by the grace of God.

Before he’d climbed the tower, Mike hadn’t planned out how the stunt would finish up. He figured that at the very least, he’d be arrested for trespassing. In fact, he didn’t even have a bottle of piss. It was apple juice, in case he spent the whole day up there and ran out of bottled water. He just wanted BCA News to be forced to publicly account for how casually they accepted Serrano’s Piss Christ as “art,” showing it on their website for years, when they were too cowardly to ever show a single peep of an unpixilated Mohammed cartoon. But finishing the morning by crawling down the twenty ladders, and hoping that some police officers would arrive to protect him from the gathering crowd of enraged Muslims?

No way. Not even if he had believed Vic Del Rio about the police escort, and he didn’t believe that lying weasel for a second. Not after Del Rio set him up for the mayor’s phone call, and the coordinated SWAT helicopter assault. Now there was only a single thin line of police barricades across the middle of 53rd Street, but there were no police officers standing behind it. Frank Salerno had said that the mayor wanted him dead. That, he believed. Some kind of a deal had been struck, but it wasn’t with him. It was between the mayor and the leaders of the local Muslim community.

Click through for the whole last part including images and video: