1, Lone hacker claims to have broken into US Democrat servers 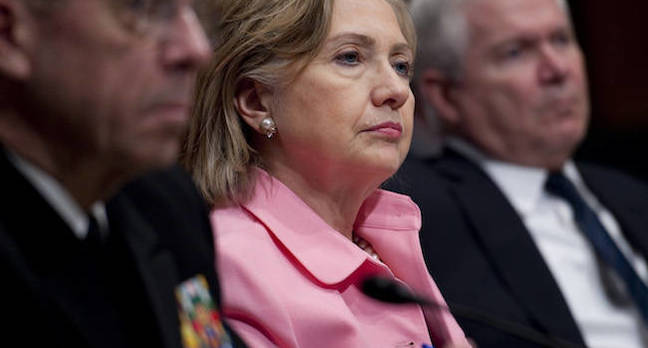 A lone hacker claims to have been the person who broke into the Democratic National Committee (DNC) servers, and has posted several files online as “proof.”

The hacker, going by the name Guccifer 2, created a new WordPress blog Wednesday and posted several confidential files as well as a taunting rebuke to the security company, CrowdStrike, that the DNC called in to investigate the breach.

He also claims to have sent “thousands of files and mails” to Wikileaks which he says will “publish them soon.”

CrowdStrike had previously said the hack was carried out by two professional hacking teams with close ties to the Russian government.

In the post, Guccifer 2 mocks that suggestion: “CrowdStrike announced that the Democratic National Committee (DNC) servers had been hacked by ‘sophisticated’ hacker groups. I’m very pleased the company appreciated my skills so highly))) But in fact, it was easy, very easy.”

(Lets hope that the release does happen and Wikileaks doesn’t use them for blackmail or other personal advantage instead of allowig the public to see, and lets hope should they allow the public, that the information shows the ends justified the means. I suspect they will, but if they don’t its a gross disservice to democracy)

(If this shooter was a patsy, then the EU got its money’s worth already)

So…. how do you have a pack of lone wolves exactly?

4. “We Want Food”: 50 Dead in Food Riots in Socialist Venezuela

(This link was submitted as the headline and part article but the poster forgot the link. So I googled it and got a few hits and NONE of them were Front Page, where the link originates. I couldnt find a link to Front Page. So I went to DUCKDUCKGO.COM and instantly got the correct link in the top hit. Advise all to switch to Duckduckgo until they manage to subvert that the way they did Facebook, Twitter, Google and all other formerly democratic and non partizan net services)

This is the political and economic trajectory of Socialism. That is what is taking place in Venezuela.

Protests have spread across the country, with people chanting “We want food!”

At least 400 people were arrested in Venezuela this week, authorities said on Wednesday, as the South American nation grapples with widespread looting and riots amid a crippling economic crisis and the world’s highest rate of inflation.

Looters swarmed shops in the coastal town of Cumana on Tuesday to seize food and other supplies, with security forces nearly powerless to stop them,

5. Idaho: Muslim migrants hold knife to throat of little girl, rape her, urinate on her

Now what we have been seeing in Europe is coming to the United States, courtesy of Obama’s policies regarding Muslim migrants.

The seizure of Infidel girls and their use as sex slaves is sanctioned in the Qur’an. According to Islamic law, Muslim men can take “captives of the right hand” (Qur’an 4:3, 4:24, 33:50). The Qur’an says: “O Prophet! Lo! We have made lawful to you your wives to whom you have paid their dowries, and those whom your right hand possesses of those whom Allah has given you as spoils of war” (33:50). 4:3 and 4:24 extend this privilege to Muslim men in general. The Qur’an says that a man may have sex with his wives and with these slave girls: “The believers must win through, those who humble themselves in their prayers; who avoid vain talk; who are active in deeds of charity; who abstain from sex, except with those joined to them in the marriage bond, or whom their right hands possess, for they are free from blame.” (Qur’an 23:1-6)

Abu Sirma said to Abu Sa’id al Khadri (Allah he pleased with him): 0 Abu Sa’id, did you hear Allah’s Messenger (may peace be upon him) mentioning al-’azl? He said: Yes, and added: We went out with Allah’s Messenger (may peace be upon him) on the expedition to the Bi’l-Mustaliq and took captive some excellent Arab women; and we desired them, for we were suffering from the absence of our wives, (but at the same time) we also desired ransom for them.

CIJnews was told that the sanction was taken for 24 hours as a response to a picture posted on Pegida Canada’s Facebook page featuring a group of refugees during the World War II accompanied with the following caption:

Speaking to CIJnes, an activist with Pegida Canada said that following Pegida’s rally on Saturday, June 18, 2016 outside of Bloor west village in Toronto, its Facebook page was bombarded with hostile comments by leftists and Islamists. She believes that their opponents conspired to attack the Pegida’s page to submit complaints to Facebook.

A Frenchman already serving prison time for glorifying terrorism has had his sentence extended after he reportedly threatened to attack a popular nudist colony in France because he didn’t like the “naked arses”.

The man had said that he wanted to attack the famous Cap d’Agde nudist colony on the coast of southern France, the Midi Libre newspaper reported.
Other inmates reported the man to authorities after he confessed his desire was motivated by the fact he did not like the “naked arses” of the nudists at Cap d’Agde.
The inmates also accused the convicted man of proselytism (attempting to convert others to his religion), anti-Semitism, and for being extremely noisy with his calls to prayer.

(Click over and read the rest, i didn’t even post the best bits! Check out the guy’s restaurant. And they didn’t mention that he was Muslim till they basically didn’t have to, but they did mention it at the end)

Thank you ML., M., Xanthippa, Wrath of Khan, Richard, Nash Montana, JH., and all. In fact many more and in fact there is a great deal more stuff in the comments worthy of our collective attention. Each of us will have a different set of criteria that determine importance or interest of course, but its pretty much all there in the comments.