1, Tweet by a Muslim Journalist of “Der Spiegel”, Hasnain Kazim, editor of Germany’s largest and most respected weekly Magazine, today:

“Get used to it: We are here, we are getting more and more, and we claim Germany for us. If you like it or not.” 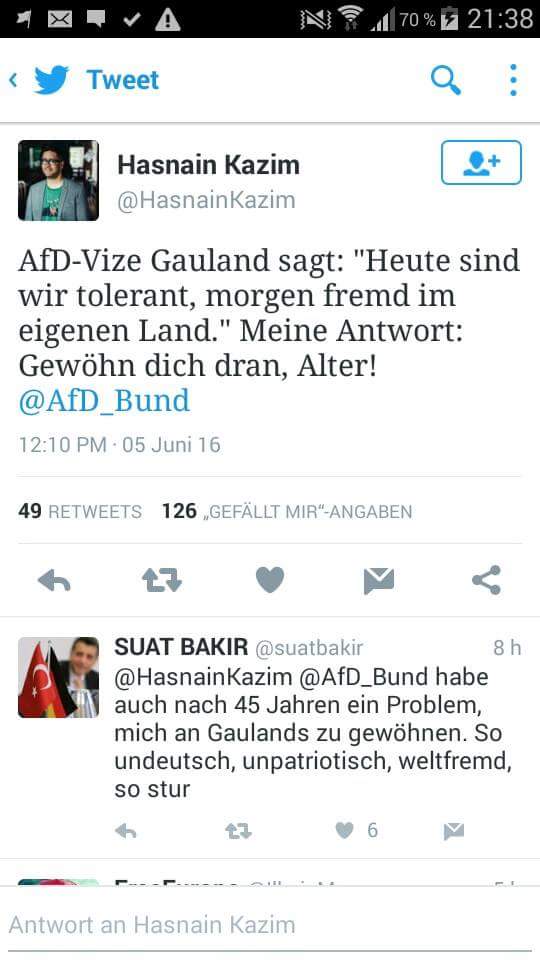 Kazim: “AfD vice president Gauland says: “Today we are tolerant, tomorrow we will be strangers in our own Country.” My answer to that: Get used to it, Old fogey!!”

(Maybe they should try sounding it out like Obama)

JEDDAH — Male gynecologists and obstetricians report have been attacked on several occasions by men who do not want them to examine their pregnant wives or deliver their babies.

Dr. Mohammad Idrees, an obstetrician at the Maternity and Children’s Hospital in Jeddah’s Mosadiyah area, said 20 percent of men coming with their wives to the hospital go as far as verbally and physically assaulting the doctors once they find out that their wives may give birth under the supervision of a male doctor.

“Many of the men refuse to have us even talk to their wives. In some cases, it is the women who refuse to be treated by a male doctor while their husbands do not have any problems with that. We have been told by the police that they receive an average of three complaints daily against male obstetricians from husbands of female patients,” said Idrees.

(The solution is simple. Religious muslims should not have babies)

4. Six hurt as shots fired at tourist bus in France

Six people were hurt when shots were fired at a tourist bus on a motorway in south-east France, police say.

The bus carrying 75 Czech tourists, some schoolchildren, was travelling from Spain to the Czech Republic when it was hit on Saturday night.

Le Dauphin Libere newspaper said more police were stationed on bridges over the road in case of repeat incidents.

It is believed the attacker was using a hunting rifle to target the bus from a bridge over the A7 motorway near Saulce sur Rhone, roughly halfway between Lyon and Marseille.

5. Islamic State Kills Dozens of Its Own in Hunt for Spies

In March, a senior commander with the Islamic State group was driving through northern Syria on orders to lead militants in the fighting there when a drone blasted his vehicle to oblivion.

The killing of Abu Hayjaa al-Tunsi, a Tunisian jihadi, sparked a panicked hunt within the group’s ranks for spies who could have tipped off the U.S-led coalition about his closely guarded movements. By the time it was over, the group would kill 38 of its own members on suspicion of acting as informants.

They were among dozens of IS members killed by their own leadership in recent months in a vicious purge after a string of airstrikes killed prominent figures. Others have disappeared into prisons and still more have fled, fearing they could be next as the jihadi group turns on itself in the hunt for moles, according to Syrian opposition activists, Kurdish militia commanders, several Iraqi intelligence officials and an informant for the Iraqi government who worked within IS ranks.

The fear of informants has fueled paranoia among the militants’ ranks. A mobile phone or internet connection can raise suspicions. As a warning to others, IS has displayed the bodies of some suspected spies in public — or used particularly gruesome methods, including reportedly dropping some into a vat of acid.

(This is quite a video)

Thank you Wrath of Khan, M., Richard, Yucki, Gates of Vienna, Xanthippa and many more.

Here is a worthy A B comparison about the ethnic cleansing of Jerusalem of Jewish people and other similar incidents around the world. Needless to say, there is only one type of ethnic cleansing that does not garner outrage.

Matt Bracken has released part I of his riveting new story as a push back against the post modern narrative on Islam. Cant wait for part II!