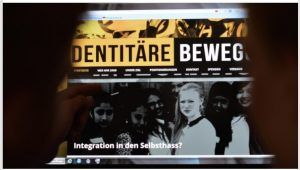 Summer camps are advertising for “young, clever, willing to make a sacrifice activists” on the internet: now the radical rightwing “Generation Identity” (IB) has been placed under government surveillance by the German Federal Office for the Protection of the Constitution.

The office took aim at the radical rightwing IB, a group that strictly opposes immigration from other cultures. “Some state officials are now looking more closely at the ID because they clearly have crossed the threshold for justified surveillance”, Hans-Georg Maassen, president of the Federal Office for the Protection of the Constitution said to the “Rheinischen Post”.

“We’ve had to determined that they have gone from simple internet activities over to actual engagements in real life in various federal states.”

The movement has made it a goal to prevent mass immigration from harming Germany’s identity. They understand themselves as a “meta-political and activist arm of the New Right”. IB also sets its goals on “physical fitness” in so called summer camps and they see themselves as being “at the beginning of a turning point (in history).”

The supporters that are most engaged in the movement are young, generally well educated males. They avoid any criminal involvement and acts such as the painting of swastikas, inflicting bodily harm/assault, and incitement to hatred.

By the end of 2014 the Identitiarians have increased their appearance in Saxony-Anhalt. Instead of operating under secrecy, the members openly circulate information about their activities on the internet, where they praise each other about their actions.

4 Replies to ““Generation Identity” in Germany Placed Under Government Surveillance”