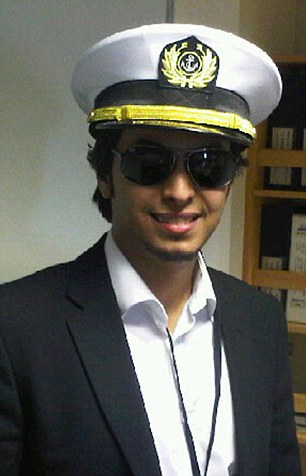 A navy officer who trained at one of Britain’s most prestigious maritime colleges has fled to Syria to join the Islamic State terror group.

Having already targeted passenger jets, there has long been concern that militants will try to bring terror to the seas by attacking ships and ferries.

‘This suddenly raises the spectre of IS damaging shipping,’ said former Royal Navy chief Admiral Lord West. ‘Someone with his knowledge opens up a whole new area where terrorism can take place.’

The killers are believed to have driven past in a pickup truck, before mowing down the officers in a hail of gunfire.

The police officers had been carrying out routine security patrols when their microbus was targeted in the violent attack.

While the attack has not yet been claimed by a group, unverified reports from local media have indicated the killers waved an Islamic State flag before carrying out the deadly assault.

Adverts proclaiming glory to Allah will be branded on hundreds of buses around the country to raise money for victims of the Syrian Civil War and portray Islam in a positive light.

Islamic Relief, Britain’s biggest Muslim charity, came up with the advertisements with the line ‘Subhan Allah’ – meaning ‘Glory be to God’.

The government-backed organisation wants to ‘break down barriers’ and portray Islam in a positive light.

Muslims will be asked to donate to the cause to ‘gather the rewards of Ramadan’. 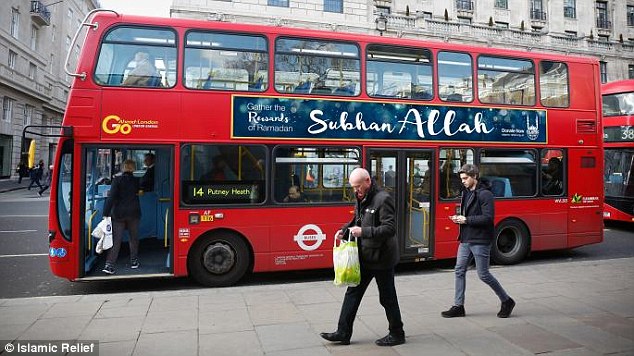 (I would track where that cash goes, penny for penny)

(I think some patriotic Bosnians may want to take a few good pointers from old style Canadian lumberjacks. How to get large trees to fall the right way for the least damage for example)

6. Shocking story of extremism in class: I taught TWO jihadis at Cardiff school where Rigby’s killer is called a hero

It is almost beyond comprehension – how could British-born teenagers educated in British schools in British towns and cities be drawn to international jihad and Islamic State?

Yet during my three years working at Fitzalan High School in Cardiff – a city where three young men were eventually jailed for helping IS – I watched as children were radicalised under my nose.

And astonishingly, senior staff did nothing in response…

Nothing could have prepared me for my first day at Fitzalan High School in Cardiff. On the face of it, the school is a typical, sprawling comprehensive. There is no external clue to the reality – that this is a place where girls can feel bullied into wearing the hijab, where many boys wear traditional robes, and where teenagers dare not listen to pop music.

A place, that is, where radical, intolerant Islam is the dominant culture, where 70 per cent of students are Muslim, and the most strident and aggressive set the tone.

Of course, it would come as a shock for any teacher to see an ex-student appear in an Islamic State propaganda video, as former student Reyaad Khan did. He would later be killed by an RAF drone strike. Or to see another former pupil sent to prison in this country for helping fellow fundamentalists join IS in Syria, which is what happened to Kaleem Brekke.

7. France: Total Rejection of Islam Across the Political Spectrum

(If only this were true. My calendar for next week would look a lot more fun)

Rabat – A poll measuring perceptions of Islam conducted by the Institut français d’opinion publique (IFOP) for Le Figaro found that people have a growing sense of unease about Islam’s role in France.

French newspaper Le Figaro reported that the poll confirmed a “total rejection” of Islam in France across the political spectrum, after Paris saw two deadly terrorist attacks in 2015.

The report, which was conducted from April 4 to 18, 2016, found that the sentiments that were once perceived as the preserve of the “extreme right” are now felt across the political spectrum.

The poll also found that “47 percent of people consider the presence of Muslim communities a threat to France’s identity, up five points from 2010,” which is an alarming number compared to the only 19 percent of the French people who believe “Muslims culturally enrich the country.”

IFOP, which measured attitudes toward aspects of Islam in French society since 1989, revealed that “33 percent of French people responded that they were ‘in favor’ of building mosques in 1989, while the figure today is just 13 percent. That year, 31 percent were opposed to wearing the veil in general, a number that in 2016 has risen to 63 percent.”

(Yes very much like if the Iranians spent 30$M to build Nazi community centers and Hitler Youth schools and called them “Restoration”, of Germany’s brief flirtation with genocidal totalitarianism) CATANIA – The mayor of the Sicilian town of Aidone Vincenzo Lacchiana and the secretary general of the Saudi supreme commission for tourism and antiquities, Ahmed Saeed Badrais, have signed a protocol of understanding with the government of Saudi Arabia for the allocation of 30 million euros for the restoration of Islamic monuments in the region…

(Perhaps shortly after that money is spent, some kind patriot can spend whatever the cost of 200 Lbs. of C4 is, and have a restoration of what life was like in Italy before and after Islamic control)

Thank you TL., M., Richard, Buck, Wrath of Khan, Shabnam and many more.

Apologies for anyone I lost track of. More to come shortly no doubt.

Some people feel the above clip has less significance than I feel it does. It may indeed just be a case of bureaucrats justifying their own existence.

On the other hand, one can use the power of that predictable  constant in concert with the other one. The idea that people like being empowered to make change instantly, so like the lone single homosexual who complained about the word “faggot” in a Dire Straights song and had it pulled from Canadian and American radio instantly till a new version was inserted, these kinds of events signal a totalitarian tactic to me.

You will not see offensive references pulled from licenses or songs that are offensive to how Marxists view greater society unless, possibly like this, its a demonstration of power. Materials like the British bus adverts, which offend the hell out of me, will never be pulled for that reason.

3 Replies to “‘Restoration’ as a weapon of conquest, Muslim traitors take critical knowledge with them and more: Links 1 on May 8 – 2016”