(For those of you who believe there is predictive value in Genesis 12:3, here is your chance to see if its true)

Several Jews refused to leave Yemen in the recent secret operation that extracted 17 Jews from the war-torn country.

Arab media reports that three of the few Jews remaining, including Rabbi Yahya Yousef, were arrested by the Houthis in Sanaa. 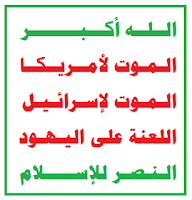 (For those who do not know, the Houthi Slogan is over at the linked originating site)

(One wonders how much of a future sports has in Europe. Or anywhere.)

Swedish police have released details of a bloody brawl between migrant youths which started out as a game but left two hospitalised and a number of others injured.

Around 40 so-called unaccompanied young asylum seekers were taking part in a Sunday football tournament when things turned violent in the remote, rural village of Myrviken. Instead of settling their differences through the match, the young migrants set upon each other with iron rods and wooden staves.

Two of those involved were rushed to hospital and several others were injured, but the fight had already ended by the time police officers were able to make it to the location of the fight, reports local paper Östersunds-Posten. Police interrogated what few witnesses were left at the scene, but the majority had already fled.

(Save the rod and spoil the tard?)

4. Sweden’s housing minister to leave after comments on Israel

STOCKHOLM (Reuters) – Sweden’s Housing Minister Mehmet Kaplan will resign following comments where he likened Israel’s treatment of Palestinians to what happened to Jews in Nazi Germany, the prime minister said on Monday.

The comments that daily Svenska Dagbladet first reported last week were made in 2009, before Kaplan entered the newly formed center-left government to represent the minor coalition partner the Green Party in 2014.

The resignation comes amid reports of tensions within the center-left minority coalition government of Prime Minister Stefan Lofven’s Social Democrats and the Green Party.

5. The ISIS Files: What Leaked Documents Reveal About Terror Recruits

A trove of ISIS personnel records obtained by NBC News has now been analyzed by experts at West Point, who say it’s the largest and “most significant” document cache of its kind, providing new insight into the terror group’s grand ambitions and diverse recruits.

The files reveal that the jihadists who joined the Islamic State in 2013 and 2014 were largely uninterested in suicide missions, better educated than expected and, to the alarm of those trying to stop the export of terror, very well-traveled.

RELATED: How we obtained the secret personnel files

NBC News received the dossiers from a Syrian man who said he stole the information, stored on a flash drive, from a senior ISIS commander. Over the last month, NBC News has worked with the Combating Terrorism Center at the elite military academy to transform them into a database of more than 4,000 foreign fighters from 71 countries.

A Palestinian man recently shot and killed by Israeli security forces after attempting a stabbing attack had chosen a life of bachelorhood  for solid theological reasons, according to a news report.

He wanted to hold out for the 72 virgins promised to terrorist “martyrs” but that was not the only factor.

“Martyrs” are also granted the perk of possessing the sexual potency of 100 men, according to the Muslim faith.

Ibrahim Barda’aya, a 54-year-old single resident of al-Aroub in Judea, was killed as he attempted to conduct a stabbing attack armed with an ax. One soldier was treated for light wounds in the attack.

Abdallah Azam, the imam of Barda’aya’s mosque, told the Hamas newspaper Palestine that the terrorist aspired to be a “martyr” and to “marry virgins in Paradise.”

(Its like a Sauna of irony. Muslims don’t get to call anyone Nazis. Next to Islamic Doctrine, Mien Kampf looks like the menu at a Kosher restaurant)

The Central Council of Muslims responded in unequivocal terms to a hard anti-Islam stance announced by the populist Alternative for Germany party over the weekend.

“For the first time since Hitler’s Germany there is a party that once again is discrediting a whole religious community and threatening its existence,” Central Council of Muslims chairman Aiman Mazyek told public broadcaster NDR on Monday morning.

He was responding to interviews with the AfD leadership published on Sunday that commit the party to a tough anti-Islam line.

“Islam is a political ideology that is incompatible with the [German] constitution,” AfD spokeswoman Beatrix von Storch told the Frankfurter Allgemeine Sonntagszeitung (FAS) in an interview.

Thank you Malca, M., Dumbstruck, Wrath of Khan, Xanthippa, and many more and WAY more to come.

We are far behind mostly because of editing and other things which are related but take a lot of time. Tonight I hope to post two very special items. Robert Spencer at an invite-only event in Montreal, and a brawl at Swedish city council along with an interview with someone who was actually there.

Op ed on Turkish mega mosque in the USA while they are expropriating and denying and expropriating Churches daily in Turkey. We have a problem and its not just in Huston.