1. Anyone else ever hear of a “salad knife” and know where to place it on a formal table? Following yesterday’s knife attack in Rosh Ha’ayin in which a 30-year-old mother of three was wounded, the Arab Israeli suspect’s mother denies the incident was a terror attack, claiming that the knife her daughter was brandishing was “for making salad.”

The mother, a resident of the town of Kfar Qassem close to the scene of the attack, told Channel 2 that her daughter wasn’t a terrorist, and decried the media for rushing to judgment.

“She’s dieting. She always carries fruit and a knife with her in her bag to make salads,” she said. In the attack, the terrorist had a box cutter in her hand which she used to stab, and another knife was found in her bag. Police have yet to officially declare the attack as terrorism.

(Not sure what kind of salad she was making here but it looks like it would have been Kosher. On further thought, I think the salad knife goes right next to the soup pistol on the other side of the plate from the dessert bomb. As it turns out, it was not a knife but a box cutter. So, I guess they like a lot of fibre in their salads)

SEOUL (Reuters) – North Korea can mount a nuclear warhead on a medium-range missile, a South Korean official said on Tuesday in a new assessment of the capability of a country that conducted its fourth nuclear test this year.

North Korean leader Kim Jong Un said last month his country had miniaturized nuclear warheads to mount on ballistic missiles. It was his first direct statement of a claim often made in state media though never independently verified. [nL4N16G5IY]

“We believe they have accomplished miniaturization of a nuclear warhead to mount it on a Rodong missile,” the South Korean official, with knowledge of South Korea’s assessment of the North’s nuclear program, told a small group of reporters on condition of anonymity.

“We believe they have the ability to mount a nuclear warhead on a Rodong. Whether they will fire it like that is a political decision,” said the official.

(Did they really change the name of the missile from Nodong to Rodong? Or is that just an accent thing?)

3. Clearing up the relationship between the world’s poor and free market economics

4. Just in case the recent case of German more-or-less, state broadcaster, ZDF, was actually showing some intestinal fortitude in the recent case of the song and poem which so displeased Turkish leader Erdogan, have a look at this video they produced more recently which gives a clearer idea of their politics. In a nutshell, if you are not in favour of total Western civilizational collapse and mass importation of Muslim 3rd worlders, you are a Nazi

A warning forwarded to Polish intelligence services by the U. S. Central Intelligence Agency (CIA) claimed that the Polish capital Warsaw, the German capital Berlin and Budapest could potentially be attacked by terrorists, the Hungarian state news agency MTI has reported, citing the Polish newspaper Rzeczpospolita.

The report comes as a confirmation of previous non-official press information suggesting that in mid-March, the CIA warned Polish authorities that mass events in Berlin, Budapest and Warsaw could face the danger of simultaneous terrorist attacks. “Is Islam compatible with Europe?”

This was PEGIDA founder Lutz Bachmann’s succinct answer, as he reclined back into the booth in a darkened corner of the Standard Bearer pub in Coventry. I could have thought of no better named boozer in which to sit down with a man like Bachmann, who has himself become the standard bearer for the anti mass migration, anti-Islamisation PEGIDA movement across Europe.

He is a big chap – standing at over 6ft 2inches tall, with the weight of a man who may have enjoyed a few pints, as well as a fair few workouts in his day.

But his imposing stature is undercut by his affability. Far from the “far right” thug that Mr. Bachmann is often portrayed as, the man exudes the charisma of a confident young man, almost as if he were just beginning his career. Remarkable for a man of 43.

Mr. Bachmann has a chequered history. He has criminal record for 16 burglaries, assaults, drug dealing, and drunk driving. He reportedly fled Germany in 1998, setting up a business in South Africa in what I can only imagine were scenes reminiscent of the Netflix series Lilyhammer.

(Not sure how much more sharia compliant the UK can be without changing its flag and banning construction of new churches. Or have they done that already?)

A Muslim hate preacher who was allowed to tour 42 British mosques spreading the message of Jihad may have sowed the seeds of the July 7 London bombings, it has emerged.

As Pakistani cleric Masood Azhar delivered extreme messages across the country, he wooed the two Britons who went on to plan the tube and bus bombings in 2005, and the beheading of US journalist David Pearl.

Omar Sheikh was convicted of orchestrating the 2002 killing of Mr Pearl and is now on death row in Pakistan, while Rashid Rauf went on to co-ordinate the London bombings in 2005 with Al-Qaeda and the 2006 liquid bomb plot to blow up trans-Atlantic airliners. 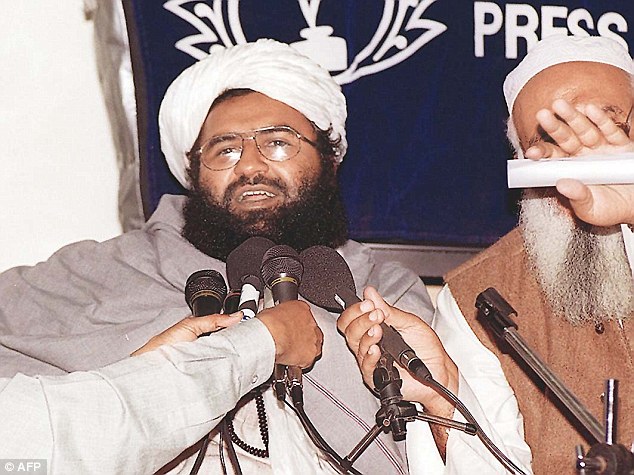 As Pakistani cleric Masood Azhar (pictured) delivered extreme messages across the UK, he wooed the two Britons who went on to plan the tube and bus bombings in 2005, and the beheading of David Pearl

Azhar, a jihadist active in northern Pakistan, met both Sheikh and Shah during his 1993 tour of Britain, when he was allowed to spout a gospel of violent jihad, documents uncovered by The Times said today.

Over thirty days, he had the opportunity to speak to hundreds of young Britons, with deadly consequences.

And his work was sanctioned by the leaders of Islamic movement Deobandi, whose voice is heard in 40 per cent of UK mosques.

8. Two Afghani men rape a 14 year old boy at a German swimming pool because Merkel would rather have the whole nation’s children become Bachi Bachi boys (whatever its called) than admit Muslims believe in raping children and unbelieving women.

Thank you Richard, M., Green infidel, Johnny U., Buck, Wrath of Khan, and all who sent in materials like translations and links and comments. More to come indeed because it isn’t like this problem is diminishing or anything.

Op-Ed: Surrendering to ISIS is the only way to defeat it

(Israel National News notices the CVE and its effects)