Dozens of Muslim women have spoken out against the systematic use of death threats and sexual violence by Muslim men within Britain’s Labour Party. They accuse the party of doing little to address the problem.

One woman alleged that Labour councillors covered for a businessman caught sexually abusing “white girls” on camera. Others, she said, forced abused Muslim women to return to violent husbands, and many others said intimidation was used to block Muslim women from local politics.

3. Dennis Prager to large crowd on Israel and the American and Jewish-American left

(Video not embedable but at link)

MORE European Union turmoil is looming with more than 30 per cent of Danes signalling they would vote to leave Brussels if a referendum was held tomorrow. 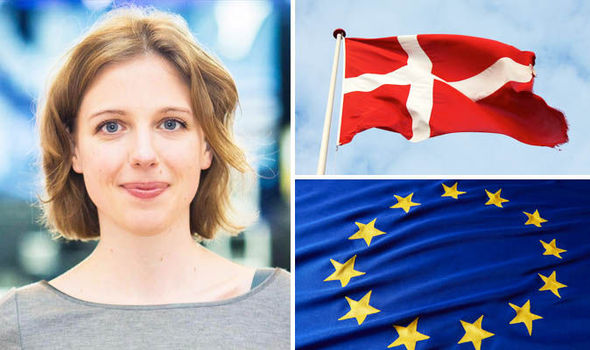 The figure of 33 per cent represents a major shift towards joining growing animosity towards the union when compared to only 25 per cent wanting to leave in 2013.

The calls for independence from the red-tape loving bureaucrats comes as The People’s Movement Against the EU has demanded the government holds a referendum in the country.

5. The leader of the band who played the Paris nightclub that was attacked by a group of Muslim terrorists who killed many, many people inside apologizes for offense he may have caused when he raised a staggeringly important point.

Speaking to Fox News on Wednesday, Hughes said he had learned that some guards did not come to work that night and “it seems rather obvious that they had a reason not to show up.”

The owners of the Bataclan were quick to dispute this, saying he had made “grave and defamatory accusations”.

BELGRADE, Serbia (AP) – Serbia’s authorities are investigating reports that a cargo package bound for the U.S. containing two missiles with explosive warheads was found on a passenger flight from Lebanon to Serbia.

N1 television said the package with two guided armor-piercing missiles was discovered Saturday by a sniffer dog after an Air Serbia flight from Beirut landed at Belgrade airport.

Serbian media say documents listed the final destination for the AGM-114 Hellfire missiles as Portland, Oregon. The American-made projectiles can be fired from air, sea or ground platforms.

7. A ballad of the sell out of our entire people by our own leaders Egypt’s Justice Minister Ahmed El-Zend was fired on Sunday little less than a year in office in the wake of widespread criticism of comments he made regarding the Muslim Prophet Muhammed that were considered to be blasphemous. The decision was taken by Egypt’s Prime Minister Sherif Ismail, state-run news agency MENA said. However, Ismail’s cabinet is yet to reveal the reasons for sacking El-Zend.Last week, in response to a TV host’s question on whether he would jail journalists, El-Zend said, “Even if he was a prophet, peace and blessings be upon him.”

9. For every police ‘martyr,’ 10,000 ‘terrorists’ should be killed: Egypt justice minister

Egypt’s Minister of Justice Ahmed El-Zend said in a TV interview on Wednesday that he believed that for every fallen “martyr” from the Egyptian police and Armed Forces, 10,000 Muslim Brotherhood members and their supporters should be killed.

“I believe that if 40,000 terrorists were killed it would not be enough for the martyrs. I swear to God that the fire burning in my heart will not die except when for every martyr, 10,000 Muslim Brotherhood members and supporters are killed,” El-Zend said while giving condolence on the Sada El-Balad TV channel for personnel killed in the war on terrorism.

The minister vowed that all the death sentences issued against members of the Brotherhood, including former president Mohamed Morsi, would be carried out after all appeals are exhausted.

10. Leftists who support mass muslim migration into Germany, protest the recent democratic gains made by an anti-immigration party in today’s regional elections

Mohamad Hisham Khalifeh (???? ???? ?????), a Canadian of Lebanese descent, the founder, CEO and Editor in Chief of Al Forqan Newspaper? (????? ???????) printed in Windsor, Ontario and distributed in Windsor, London and Detroit, has recently said to the Windsor Star that “we do support all kinds of resistance.”

When asked by the Windsor Star (March 3, 2016) to comment on his controversial editorial about the Palestinian al-Quds/ Knife Intifada and the “sacred duty of jihad”, Khalifeh was quoted as saying the following: “That’s not correct. It wasn’t said in that phrase. The editorial was saying we support Palestinians resisting the Israeli occupation. That’s the main thing… We don’t support any terror attacks on civilians,” Khalifeh said. “But “we do support all kinds of resistance.”

In previous editorial (Al Forqan, Issue 18, July – August 2014, p. 1) entitled “Gaza of Glory and the Lessons of the Resistance/ Struggle”, Khalifeh said that the “sacred duty of jihad” is being fulfilled by Hamas and other Palestinian armed militias which launched rockets attacks on Tel Aviv, Haifa and other cities in Israel. The following is Khalifeh‘s editorial (originally in Arabic):

Anyone got an explanation for this?