Police have too few resources, and the situation is unsustainable both for the police and the citizens.

The criticism from the policeman Mikkel Jørgensen from Thy is fierce.

After seven years with the police, he went on leave and has now gotten other work, he says to DR.

It was simply too hard to accept the pressure at work and the lack of resources to solve simple police tasks at the end:

– Now we have nine refugee centers in Thy, and we only have one patrol. If something happens inside one of the centers, we must not go in. Instead they send a car from Holstebro, and meanwhile we have to wait while the war rages inside the center, he said.

And for citizens in some areas it is virtually anarchy, he says.

2. CBC Peddling allowing “mildest forms” of FGM
(Oh how Feminism has hit the CVE at the CBC)

Countries that have banned female genital mutilation should allow less invasive practices such as small surgical nicks to girls’ genitalia as a compromise, two U.S. gynecologists said on Monday.

But campaigners against mutilation strongly criticized the proposal, saying it would undermine global efforts to eradicate the internationally condemned ritual.

3. Obama closing Gitmo. What does that mean really?

Barack Obama announced Tuesday that he was finally fulfilling one of his foremost campaign promises and closing the Guantanamo Bay detention center. Usually the closing of a prison camp for enemy combatants signals the end of the war, and since Obama has never acknowledged that the U.S.’s defense against the global jihad is a war at all, it is fitting that he should end his presidency by closing the camp that so notoriously demonstrated otherwise. And besides, the jihadi leadership ranks need replenishing.

Certainly Obama has replenished them a great deal already. With as many as thirty percent of prisoners freed from Gitmo returning to the jihad, one would think that the Obama administration would pause and consider their plan very carefully before releasing more or transferring them to far less secure prisons inside the United States

(Here is a thought. Why not lead Britain out of the EU?)

The Czech Republic may choose to follow Britain out of the European Union, the country’s prime minister said, amid growing fears in Brussels of a “contagion”.

Bohuslav Sobotka said that a “Czexit” may take place. The Czech Republic only joined the EU in 2004 and has been the beneficiary of billions in development funds, but has some of the most hostile public opinion.

A Brussels decision to force the country to take in a quota of migrants caused fury. Three-fifths of Czechs said they were unhappy with EU membership and 62 percent said they would vote against it in a referendum, according to an October 2015 poll by the STEM agency.

“If Britain leaves the EU, we can expect debates about leaving the EU in a few years too,” said Mr Sobotka, who led eastern European states in opposition to David Cameron’s plans to curb benefits.

5. Minnesota DPS apologizes for granting ‘FMUSLMS’ personalized license plates to driver who claimed it was the name of his band

(I would go listen to that band. Albeit wearing a bullet resistant hat, mitts, vest, long underwear and shoes.)

Minnesota Department of Public Safety has apologized for issuing a set of personalized license plates that read ‘FMUSLMS’.

The DPS said the ‘offensive’ plates should never have been granted to a man, who reportedly claimed on his application form that it was the name of his band.

A photograph of the plates started circulating on social media earlier this week and, after uproar from advocacy groups, Minnesota Governor Mark Dayton stepped in to get them revoked. 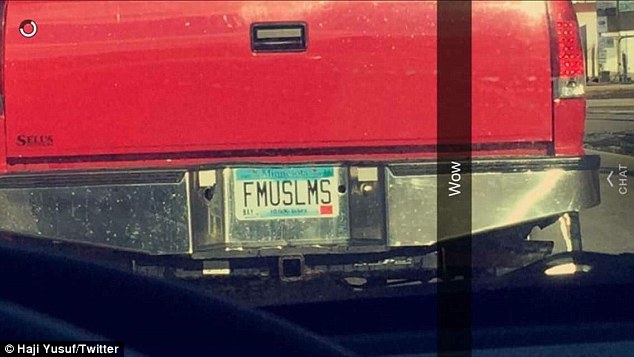 (If this was WW2 and someone wanted a plate that said FNAZIS I think it would have been approved. That and the 1st amendment)

6. ISIS fighters take over security HQ and decapitate 12 members of staff in Libyan city used as hub by migrants heading for Europe

(I wonder if this could have anything to do at all with Obama’s refusal to bomb Islamic State Targets in Libya this week?)

6. ‘If you believe in raping little girls you must be Muslim’: Vile note left in an Islamic prayer room at Sydney University – after the room was completely trashed

The Islamic prayer rooms at a prominent Australian university have been vandalised and flooded with racist notes accusing Muslims of being rapists and thieves.

A student discovered the had been ransacked about 10am on Monday morning, and found a letter with ISIS leader Abu Bakr al-Baghdadi on it, Honi Soit reported.

This is apparently the fifth time the room at the Old Teachers’ College at Sydney University has been targeted in just three months. 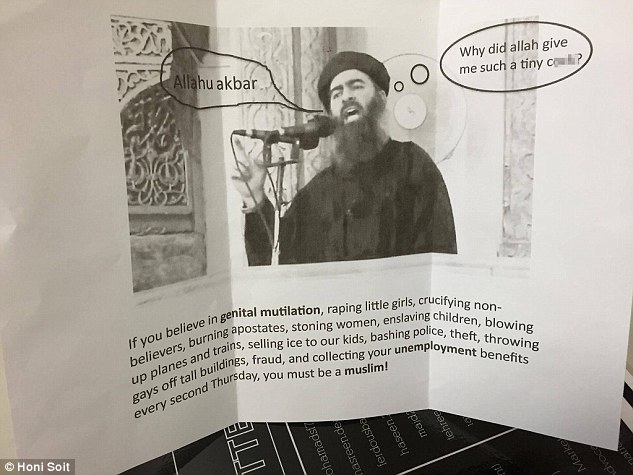 ‘Five alleged break-ins over a period of three months is quite significant for an Islamic centre at a prominent university,’ Mariam Veiszadeh, President of Islamophobia Register Australia told Daily Mail Australia.

7. North Korea threatens to carry out attacks on ‘mainland America’ if the US carries out planned military drill with South Korean troops

North Korea has threatened to attack ‘mainland America’ if the U.S. carries out a planned military drill with South Korean troops next month.

The secretive state has reacted with anger after it was revealed more than 300,000 American and South Korean troops were planning to hold their biggest ever annual exercise following the North’s nuclear tests earlier this year.

It is said the parallel Key Resolve and Foal Eagle exercises will include a staged ‘pre-emptive strike’ against the North – apparently leaving leader Kim Jong-Un seething.

Pyongyang has said if there is even a ‘slight sign’ of such exercises taking place, it will use all its might to hit back – claiming the first target would be South Korea’s presidential Blue House, while U.S. military bases in Asia and in America would be its secondary targets.

At approximately 12:30 a.m. on December 27 of last year, Onder Pinarbasi, 22, and a 16-year-old boy allegedly took the woman, aged in her 30s, to a public toilet near JR Akabane Station and sexually assaulted her. The suspects also stole 9,000 yen in cash from the victim.

Pinarbasi, who has been charged with rape and robbery, claims the boy committed both crimes. The boy admits to onlyl the robbery charge. “I did not force myself upon her,” he is quoted by police in denying the rape accusation, according to the Yomiuri Shimbun (Feb. 22).

9. USA: Business owner requiring all employees to be armed

(It is sad that that people felt this was needed, but truly excellent that it was possible to do. As bad as it is that all people in a given circumstance need to be armed, its far worse then they need to be and government forbids them to be)

10. FBI seeking access to a dozen iPhones, not just one

(As critics of the FBI position on this, and sadly Donald Trump’s, we now see that in fact it likely is what we expected. The FBI wants access to everyone’s data, warrant or not. I guess they are just to proud to ask the NSA)

Apple has challenged the White House’s claims that its use of a controversial law to access the iPhone of San Bernardino shooter Syed Farook is limited in scope.

The Department of Justice has sought access to iPhones, including the company’s very latest models, under the All Writs Act at least 11 times since September, according to a letter from Apple counsel Marc Zwillinger to federal magistrate judge James Orenstein dated Monday.

The 227-year-old All Writs Act compels third parties to assist authorities in their investigation and is usually a measure of last resort. Apple contends the FBI is misusing the legislation.

Zwillinger’s letter appears to contradict the position articulated by White House spokesman Josh Earnest last week that the order sought by the DoJ in the case of Farook is limited in scope. “They are not asking Apple to redesign its product or to create a new backdoor to one of their products,” Earnest said. “They’re simply asking for something that would have an impact on this one device.”

Thank you M., Shabnam A., Richard, Behead and shoulders, Tundra T., Buck, and many more who sent in valuable news links and opinion pieces. For those that do not know, please check the daily links posts for the full contribution of readers, many of which do not make the posts. Once again, thanks to many of you who diligently find the cracks in the media narrative to bring a dose of reality to we few here at Vlad Tepes and similar other sites.

7 Replies to “Geopolitics, Islam, Western authority cracking and changes to the culture thanks to leftists and Islamic agency: Links 1 on Feb. 24 – 2016”