1. Donald Trump: mass immigration from Islamic nations would lead to the “end of Europe”

(If these quotes are accurate, Then Trump may be the only politician in a position to potentially have influence that both understands the issues and is willing to say them out loud)

Trump also predicted nothing less than “real revolutions” if there was not a change in policy—presumably as native Europeans rise up against their own treasonous leaders. [EXCLUSIF. Trump : “La France n’est plus ce qu’elle était”, by   André Bercoff, February 10, 2016]

The interview created headlines all around the world, notably in outlets like the London Daily Telegraph, Newsweek, and RT (formerly Russia Today). But despite mentions in The Blaze and WND (formerly WorldNetDaily), the Beltway Right seemed unconscious of a prediction of the imminent end of Western Civilization from the GOP’s leading contender for President.

One of the most familiar buildings in Keighley — an old mill town in the heart of Bronte country in West Yorkshire — is the former police station, with its underground car park, on Devonshire Street.

The ‘cop shop car park’ — as it is still known today — is the unofficial divide between Keighley’s two Asian areas: Highfield, which lies on a hill rising from the centre of Keighley up towards the moors, and, at the opposite end, Dalton Lane and Lawkholme.

Young Asians from these neighbourhoods refer to themselves as ‘Top Enders’ and ‘Bottom Enders’ respectively. Rivalries between them, fuelled by the drugs trade, have sometimes spilled over into violence. 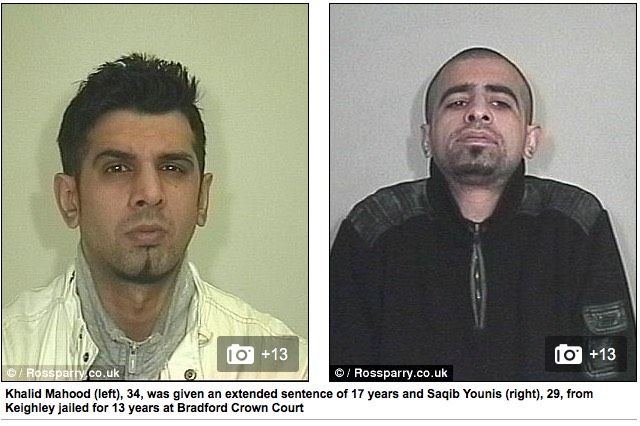 (Notice how RT frames this issue. It really wasn’t that long ago that they would have been called ‘far left’ activists for doing exactly the same thing. They still would today if a case could be sold that it was white Europeans that are the problem. Then the left would be out there giving away Soros-bought tasers and testicle shaped cattle prods. But since it is rational people giving a defense to women against a genuine threat, muslim illegals, suddenly they are “far right”. If ever there was an appropriate use for the 80s slogan, ‘think for yourself’ its in response to how the MSM labels people today)

Austrian members of the far-right ‘Identitarian’ movement distributed pepper spray cans in Vienna on Thursday, in a bid to encourage women to protect themselves against attacks. The activists claim that following a large influx of refugees into Europe, women should be prepared for a purported increase in sexual abuse cases.

Following dozens of attacks on women in Cologne over New Year’s Eve, Europe’s far-right have stoked fears that the recent influx of refugees will increase the rate of sexual abuse cases and violent crime. Self-defence equipment and personal weapons sales have reportedly sky rocketed in European countries taking the majority of asylum seekers.

In neighbouring Germany, applications for small-weapons licences have doubled since the beginning of 2016, while 300 requests were made in Cologne alone in January.

Almost a month ago, Fox News reported that the FBI’s investigation of possible national security violations stemming from Hillary Clinton’s private email system had expanded to include a corruption angle, centered on the Bill, Hillary, and Chelsea Clinton Foundation and the possibility that Foundation donors received favorable government treatment during Mrs. Clinton’s tenure as secretary of state.

The Fox report prompted indignant denials from Mrs. Clinton’s presidential campaign that there had been any broadening of the probe. Yet, the government is not required to disclose the course of its investigation publicly, much less to its subjects. And now, there are additional indications that the government is indeed scrutinizing the cozy relations the State Department enjoyed during Secretary Hillary Clinton’s tenure with both the Clinton Foundation and a Clinton-connected consulting firm called Teneo.

A Muslim Conservative Councillor in Bradford has admitted that some local Muslims believe child victims of Muslim sex-grooming gangs are complicit in their abuse. “They believe it takes two to tango,” he said.

His comments come after 12 Muslim men were sentenced to a combined 143 years in jail for the year long abuse of a vulnerable 13-year-old girl.

On Monday, the twelve men of Pakistani origin were handed sentences at Bradford Crown Court of between three and a half to 20 years for their role in the sexual exploitation of a 13 year old local girl who was repeatedly raped by the gang, the Daily Mail has reported.

6. Turkey and Saudi Arabia ready to send in ground troops to the Syrian theater

(For Danish News story on this issue please click here)

(One may wonder about why the Russians are broadcasting this other than they may want those NATO members capable of knowing what this naval asset can do to know what Russia is capable, and presumably willing to do)

Police are investigating a killing at an asylum center in Sweden after a fight broke out among residents.

It is the second such incident in a month after a 22-year- old employee at a refugee center for unaccompanied minors was stabbed to death, prompting concerns that authorities were being overwhelmed by the number of asylum seekers in the country.

Police said the fight broke out on Saturday afternoon in Ljusne, a town of about 2,500 people on Sweden’s east coast, some 240 km north of Stockholm, but gave no further details.

Swedish media said four people had been involved and a sharp object had been used. It appeared to be a fight among people living at the center and no staff were injured.

10. First Calais, Then Dunkirk, Now Zeebrugge Is Set to be Overrun by Migrants Clamouring for Britain

Migrants determined to get into Britain are abandoning the camps at Calais and Dunkirk and making for the small port town of Zeebrugge in Belgium, where security has not yet been beefed up. The rapid influx of migrants to the area has many locals alarmed, as they fear social unrest of the sort recently witnessed in Calais.

Calais is currently on the front line of the European migrant crisis thanks to the 7,000 migrants camped out at The Jungle on the outskirts of town, not to mention the hundreds of far left activists who have flocked to the area.

(Funny, the people of Calais have not noticed any reduction in migrants there)

Also this is an amusing bit of wishful thinking about El Al. But beyond the amusement value, it is a decent rhetorical device against leftists that claim they are not racist but of course are.

You can ask them if they are against terrorism and racial profiling. They will likely say yes. Then ask if they would be OK with such a device as it doesn’t profile and then listen to the stony silence as they do the math because even they know that 99%+ of all that get blown up in said manner would be muslims.