2. Second member of IS execution cell identified as Briton: report

A second member of a British group of Islamic State militants dubbed “the Beatles” has been identified as 32-year-old Londoner Alexanda Kotey, according to a Washington Post and BuzzFeed investigation published on Sunday.

The group, whose leader Mohammed Emwazi gained notoriety for appearing in videos showing the murders of Western hostages, are said by former hostages of Islamic State to have been assigned to guard foreign prisoners, and were nicknamed “the Beatles” due to their English accents.

Londoner Emwazi, referred to by British media as “Jihadi John”, is believed to have been killed in a U.S. drone strike last year.

A professor at a conservative Christian college in suburban Chicago who was suspended after saying Muslims and Christians “worship the same God” is now “parting ways” with her employers.

Wheaton College announced the news this weekend in a joint statement with Professor Dr Larycia Hawkins.

The private evangelical Protestant college released the statement between its president Philip Graham Ryken and the political science professor on its website.

4. One night at UK ‘Asylum’ center costs more than most luxury hotels. FOR FAILED asylum seekers!

German police have searched the homes of two men suspected of being part of an extremist organization.

The dpa news agency cited a spokesman for German federal prosecutors confirming the raids Sunday near the western city of Mainz.

The men are reportedly suspected of membership in a “foreign terrorist organization” active in Syria.

(Not long ago when speaking to a group of muslims, he was extremely clear that strength lied in solidarity. When he speaks to his own, he uses Alinsky language. Here of course, speaking to the indigenous British, he uses the anesthesia of “Strength of diversity”, which is such an obvious lie, people accept it due to cognitive dissonance)

Seven people have been arrested in Spain on suspicion of supplying weapons and bomb-making equipment to ISIS leaders in Syria and Iraq.

Six men were held during dawn raids today in Alicante, Valencia and Spain’s north African enclave of Ceuta, with a seventh person was arrested later in the morning.

Spain’s acting Interior Minister Jorge Fernandez Diaz said they were believed to be part of a jihadist group that sent the weapons in shipping containers, disguised as humanitarian aid. 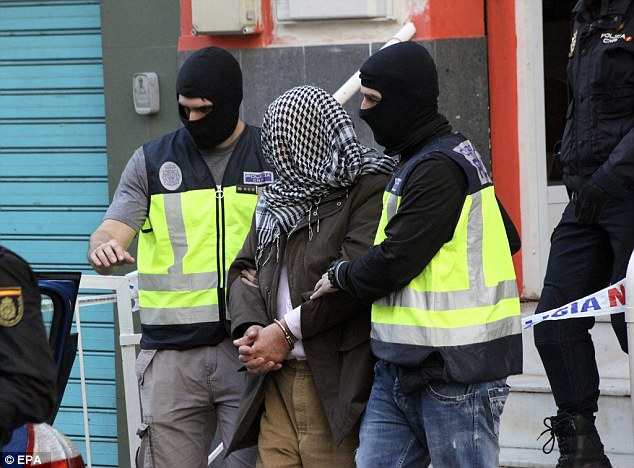 Arrests: Spanish policemen escort a man who was arrested during a operation against Jihadist terrorism in Ceuta, Spanish enclave in northern Africa

Police described the material, which also included cash, and electronics equipment,, as ‘essential’ to the sustainment of the activities of the two terrorist groups they are accused of supplying; ISIS and al-Qaeda-affiliated organisation Jabhat al-Nusra.

11. Ezra helps Christian group in Toronto win the basic rights every other group has in Canada

Thank you Wrath of Khan, M., Gates of Vienna, Maria J., and all who sent in materials and links.

I always recommend that people check the items in the daily links post but today there are more geopolitically significant links than even usual. So for those that want to gauge the kinetic aspects of the effect of religious islam in various countries seriously infected with it, please check those links.

Well, no one can accuse the Catholic Church of not getting with the times.

Below, is 47 minutes of the 2 hours of one of the hearings, on the Canadian plan to fast track upwards of 50,000 unidentifiable muslim immigrants (UMIs) on US security. This was edited mostly to remove a Canadian plant who used mostly just politically correct noise to avoid the issues rather than speak to them. However her testimony is on the original video which I have posted the link to before. The meat of the issue as it was presented in this hearing is all here however.

4 Replies to “Is France a flashpoint? A counter-revolution is needed if liberalism is to be preserved: Links 2 on Feb. 7 – 2016”