1. Sweden: Giant graffiti on wall offering choice of praying to ‘allah’ or death (It’s a good thing this wasn’t done in Quebec. The fines they would receive for not making this threat in French, although English would be allowed if the letters were only half as high, can be in the hundreds to thousands of dollars and include having their car towed. In Sweden of course, threatening to kill people if they don’t convert to Islam can be done in any language at all although the use of black spray paint may be seen as racist)

4. Not super clear what this video is, but it appears that at the end of it, during some battle, Turkish flags are being found in a place they are not meant to be.

(Need to look into other insignias etc. later when time permits. Comments?)

5. ‘My perfect daughter was stitched up’: Father of British jihadi mother jailed for six years for taking toddler to Syria to join ISIS denounces ‘Islamophobic’ verdict and says she will ‘devote herself even more to God’ 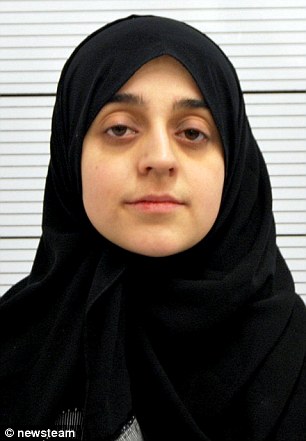 The father of a British jihadi mother who has been jailed for six years for taking her toddler to join ISIS in Syria has claimed his daughter has been ‘stitched up’ due to ‘Islamophobia’.

Tareena Shakil, 26, travelled to the war-torn region in October 2014 where she became immersed in the world of terror, became a jihadi bride for an ISIS fighter and spoke of her desire to become a ‘martyr’.

She also posed her 14-month-old son for pictures next to an AK47 before posting messages which called on followers to ‘take on arms’. 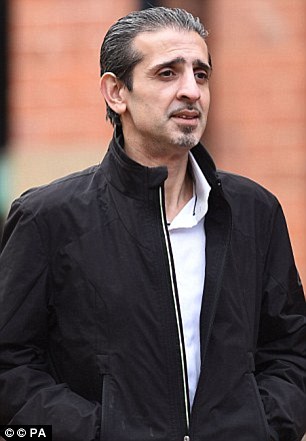 6. Sweden defends plan to deport tens of thousands of migrants

Sweden’s Interior Minister Anders Ygeman defended government plans announced on Wednesday to deport up to 80,000 people whose asylum applications are set to be rejected, around half of the 163,000 asylum requests they received in 2015.

7. Shocking footage claims to show a group of migrant men ‘attacking two pensioners who stood up for a woman they were harassing on the Munich subway’

Shocking footage has surfaced online appearing to show a group of young migrants attacking two German pensioners after they stood up for a young women the men were harassing on a subway train.

Recorded on a mobile phone, the disgraceful video shows the men – of Eastern European or Arabic origin – holding one man by the arms as they verbally abuse him.

The second victim is seen grappling with one of the migrants, before he is held up by the neck and threatened.

Munich man Tom Roth uploaded the disgraceful video to his Facebook page. He caught the footage while travelling from Sendlinger Tor station to the Metro’s city centre terminal.

CAIRO (AP) — Three Coptic Christian students face charges of insulting Islam and will stand trial this week after appearing in a video mocking Muslim prayers, one of a series of court cases that reflect lingering religious intolerance and Muslim-Christian tensions in Egypt.

The students, all in high school, will stand trial on Thursday after their teacher was sentenced to three years in prison after a separate trial over the same charges of insulting Islam, according to lawyer Maher Naguib.

The 30-second video, filmed by the teacher, showed the students pretending to pray with one kneeling on the floor while reciting Quranic verses and two others standing behind him and laughing. One waved his hand under a second’s neck in a sign of beheading.

Naguib said the video came to light in April 2015, shortly after Islamic State militants in Libya beheaded dozens of Egyptian Christians. The video prompted calls by angry Muslims to evict the students and the teacher from their village. They were detained and the teacher and his family were ordered to leave the village after a meeting of the village elders.

“The students couldn’t attend school and remained indoors to avoid insults, beating and harassment,” said Naguib, the lawyer. “This is all because of random and spontaneous action by some youngsters inside a bedroom and for only few seconds.”

(It isn’t just that they are murdering those of us foolish enough to help them. We ar forbidden from grieving our loss in case it offends those who murdered us. This is unconscionable. As much as the new wave sweeping the Western world of information control, from the left wing buying or usurping conservative and non-leftist media, to government manipulation of social media so as not to reflect reality.

This requires people to take freedom back for themselves.) 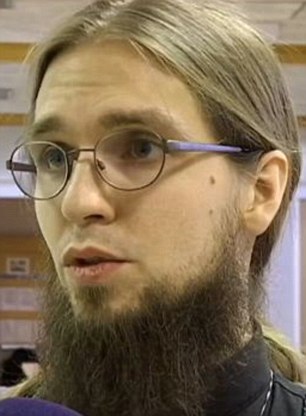 I hope he feels stupid about his jihadi beard now

Staff at a housing centre for child migrants in Sweden have been banned from holding a memorial service in honour of a fellow social worker who was murdered last week.

Alexandra Mezher, 22, was stabbed to death when she tried to break up a fight between two teenage boys at a home for unaccompanied minors in Molndal, Gothenburg.

When staff at a similar accommodation in Örnsköldsvik, north-east Sweden, wanted to hold a memorial for Miss Mezher, the council said no.

Miss Mezher’s murder sent shockwaves across Sweden, and has highlighted a number of issues that has followed in the wake of the large number of asylum seekers to arrive in Sweden in the past 12 months.

Staff and social workers at a home for unaccompanied minors in Örnsköldsvik, a town on the north-east coast, were deeply affected by the killing of a colleague in the workplace.

‘What happened in Molndal could have happened here. That’s how bad it is,’ Carl Lindahl told SVT Vasternorrland.

Mr Lindahl, who has worked in homes for unaccompanied minors for three-and-a-half-years added that housing facilities for child migrants all over the country are ‘unreasonably overcrowded’.

(Two things. 1 these ‘boys’ were likely 25 and 2. this ‘fight’ was almost certainly staged for the express and sole purpose of attacking the worker. Don’t believe me? As ANYONE who has ever worked at any similar facility)

10. Levi Bellfield is now a Muslim: Milly Dowler murderer is known as Yusuf Rahim after converting to Islam in move that grants him special privileges

Triple killer Levi Bellfield has converted to Islam in prison – a move which grants him better meals, more time out of his cell and an excuse to withdraw from work and classes.

Calling himself Yusuf Rahim, the warped murderer is now gorging on much sought-after vegetarian curries and is allowed to avoid his jail duties to attend prayer meetings instead.

Prison bosses have seen a surge in Muslim inmates in recent years, with one in five of those serving sentences in Britain’s maximum security jails now following Islam. 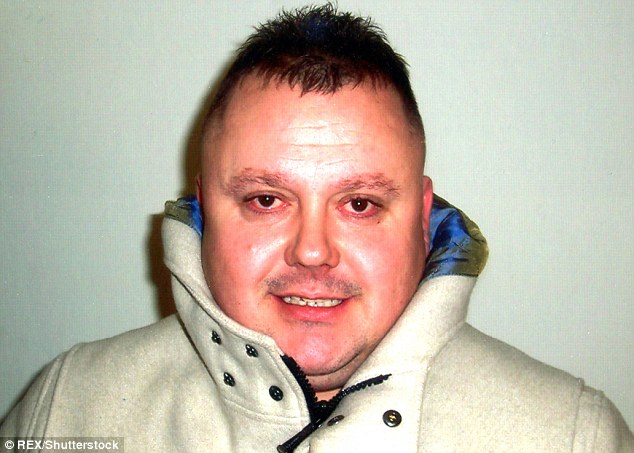 Triple killer Levi Bellfield (pictured) has converted to Islam in prison – a move which grants him better meals, more time out of his cell and an excuse to withdraw from work and classes

Calling himself Yusuf Rahim, the warped murderer is now gorging on much sought-after vegetarian curries and is allowed to avoid his jail duties at HMP Wakefield (pictured) to attend prayer meetings instead

The Officers’ Association union previously put that down to thousands of lags becoming so-called ‘convenience Muslims’ – converting to the religion to deliberately play the system.

By doing so, dangerous prisoners have also found it easier to form gangs, leading to heightened tensions with guards and the fuelling of extremism.

(Try not to think about who is paying for all his privileges. While the feelings you would generate are appropriate, they would likely be bad for your health. Wait, and lets deal with this whole thing at once)

11. Saudi Man Faces 1,000 Lashes for Having Sex With Vacuum Cleaner

Riyadh | Saudi police officers in the district of Al-Mansuriyya in the branch municipality of Al-Shifa have arrested a man accused of having sex with his vacuum cleaner, reports the Riyadh Daily.

The man was caught in full action by his wife of 17 years before she reported her husband to authorities.

“After 17 years of loyalty, this is how this miscreant treats me,” she told local reporters. “I feel used, I feel dirty,” she added.

As adultery is a crime punishable by death in Islamic law, usually performed by stoning the person to death, experts believe the man’s condemnation is a light one.

“Due to the peculiar nature of this case of adultery, in which the accused performed sex with a home appliance and not with an animal or a human being, the judge has decided to give him a lighter sentence than usual for this crime” admits legal expert and Middle East specialist, Hakim Ben Ali. “Two years in prison and 1,000 lashes is more than acceptable for the region,” he acknowledges.

(So rape is OK, keeping slaves and raping them is OK, and anything you do to a non-believer is OK but sticking your bean in the Filter Queen is punishable by death? Anyone still thing sharia law is a viable alternative. Many Americans would walk a mile for a Camel but a Saudi is willing to take 1000 lashes to inseminate a Dyson. That does show character. Perhaps he drew inspiration from this Roberto Benini movie)

*** UPDATE: On the other hand, maybe his attraction to the appliance is that in Saudi Arabia, vacuums wear the bag on the inside. The real question would be was it over 6 years old, Because then it would be the death penalty using their logic. ***

T Rex vetted this story and found that the source was unreliable. The tip off should have been that his wife claimed that after seeing her husband with the dust buster she felt dirty. In fact she likely was sleeping with a man who had the cleanest sex organ in the Arabian Peninsula ***

Thank you M., Pym Purnell, Maria J., Wrath of Khan, Richard, Buck and many more. Much more to come. Oh yes indeed. Remember, Saturday is the multi-nation PEGIDA demos in Europe. This is something to look forward to. Gavin Boby and others will be speaking in Copenhagen, Gavin in English. Please check out www.pegidadenmark.com for details being updated regularly.