Anyone else feel like 2016 is already exactly what Stephen Coughlin and others by way of discovered MB and MB front group documents predicted it would be? Not peaked out yet but basically on or ahead of schedule?

1. Illegal immigrant ‘screamed “you have treated me like a dog” before punching and strangling American artist to death in jealous drug-fueled frenzy’ after sex in her Italian apartment 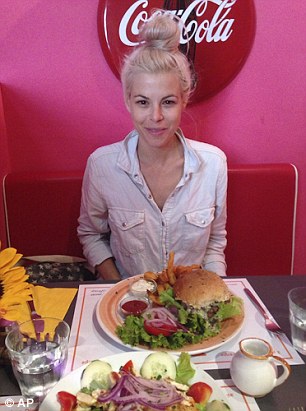 An illegal immigrant has confessed to killing American artist Ashley Olsen in her Italian apartment, who was punched and strangling her with a USB cord in a jealous ‘drug-fueled’ frenzy.

Cheik Tidiane Diaw, 25, told officers he strangled Olsen after the pair had sex when she told him he had to leave because her boyfriend was coming back.

The Senegalese man was caught because of DNA evidence from a used condom and cigarette found in the toilet – which he had tried to flush away unsuccessfully.

Italian police said they had to swoop on him quickly because they feared he was about to flee Florence.

The chief prosecutor said that the alleged murderer had initially given a false alibi to police when he was first questioned. He was freed but then re-arrested when his DNA was matched.

Olsen, whose funeral will be held in the Italian city tomorrow, suffered two fractures to the skull and was strangled with a USB cord.

She met her alleged killer at the Montecarla club, notorious for sex and drugs, and left together at 5.30am, when they went to her apartment.

(The rest of the story can either be found here, at the DM., or Here, in Charles Darwin’s Origin of Species. The Italian government however will likely go for USB cord controls)

(Thats about all on that really)

3. This video claims to be of Austrians fighting back against some Afghan illegals who robbed a woman. So many of these videos are now fake or old or out of context its hard to know. Perhaps an Austrian familiar with the location can solidify this. But the description given at the YT page is somewhat surreal. It desperately tries to make the Afghans the victims even though they mugged an Austrian woman. And the divide grows ever wider.

4. Swedish police avoid probe after sex ‘cover up’ at festival

Announcing the decision in a statement, Mats Åhlund, a laywer at the special prosecutor’s office, said there was “no reason to believe representatives of the Police Authority committed crimes subject to public prosecution”.

Earlier this week, police were criticized after they admitted they failed to release information about the alleged sexual assaults against women by young immigrants.

After the alleged attacks were revealed in a media report, police said there were 38 reports of rape and sexual assault filed after the We Are Sthlm festival in 2014 and 2015 – a Stockholm-based festival which uses the postal abbreviation for the city.

The allegations, however, were not publicly released at the time.

The Swedish daily Dagens Nyheter (DN), which reported the failure to disclose the allegations, reported that among the majority of people suspected of being involved were 50 Afghan refugees who had come to Sweden without their parents.

5. Danish girl who converted to Islam arrested with explosives

The girl was reportedly arrested on Wednesday afternoon at her home in the village of Kundby on the island of Zealand.
TV2 reported that the 15-year-old is being charged under Denmark’s terror laws. Charges include the possession of explosives, detonation of explosives and sanctioning or encouraging terror.
Central and West Zealand Police said early Thursday morning on Twitter that it would not immediately comment on the case:

6. Five unnamed ‘Spanish’ Lifeguards arrested for people smuggling in Greece
7. Palestinian cyber terrorists hack James Clapper, director of National Intel’s phone, email and other aspects of his life.
(Read this one to the end. This is no small thing)

A group of hackers calling themselves “Crackas With Attitude” or CWA made headlines in October, hacking into CIA Director John Brennan’s email account and apparently getting access to several online tools and portals used by US law enforcement agencies.The hackers’ exploits prompted the FBI to issue an alert warning government officials of their attacks.

One of the group’s hackers, who’s known as “Cracka,” contacted me on Monday, claiming to have broken into a series of accounts connected to Clapper, including his home telephone and internet, his personal email, and his wife’s Yahoo email. While in control of Clapper’s Verizon FiOS account, Cracka claimed to have changed the settings so that every call to his house number would get forwarded to the Free Palestine Movement. When they gained notoriety last year, Cracka and CWA claimed their actions were all in support of the Palestine cause.

8. Norway to stop returning migrants to Arctic Russia by bike

9. Fresh analysis that actually makes sense on the Iranian seizure of two US Navy ships and capture of 10 servicemen.

Iran’s army chief said on Wednesday the seizure of two US navy boats and their 10 sailors should be a lesson to members the US Congress trying to impose new sanctions on Tehran.

“This incident in the Persian Gulf, which probably will not be the American forces’ last mistake in the region, should be a lesson to troublemakers in the US Congress,” Major General Hassan Firouzabadi, head of Iran’s armed forces, was quoted as saying by Tasnim news agency.

Well, what do you know.  An incident that was supposed to be entirely accidental, involving a mechanical breakdown and two U.S. Navy boats straying inadvertently into Iranian waters, with the Iranians sort of implicitly seizing the boats because they were stranded at sea (although that was never clarified, but more in a minute on the topic) – this culmination of total happenstance should serve as a “lesson to troublemakers in Congress” who want to impose new sanctions?

10. Video report on the murder of an American woman, living in Italy, who had a fatal liaison

11. Video of Chunnel area flooded as a barier to UMIs breaking into Britain. (Is this geopolitics in its purest form? Changing the actual geography to manipulate human behaviour?)

12. Tommy Robinson police interview on battery charge for defending himself against a gang of muslims who used ‘prison-napalm’ (Boiling water and sugar) to attack him first

Austrian police have released the first photo of one of the New Year sex attackers after sharing a picture of a man who attempted to rape a young woman as she opened the door to her apartment block.

The 28-year-old woman was heading back to her flat after spending the New Year with friends in the early hours of the morning.

She had travelled with the Vienna Underground line U1 and had not realised that a man had departed from the same station as her, and had apparently followed her home.

As she opened the door, he grabbed her from behind and forced her inside where he attempted to rape her, saying the word “sex”.

Police spokesman Paul Eidenberger said: “He grabbed her and the only word that she could understand from what he was saying was ‘sex’.”

Thank you Buck, Richard, M., Tundra T., Maria J., Yucki, and many more who took the time and effort to share important information and research it. More to come.

6 Replies to “More and more on islamic attacks on civilization and leftist attempts at deflection: Links 2 on Jan. 14 – 2016”