Following allegations of assault in Cologne on New Year’s Eve, police officers reinforced stop and search patrols in Hamburg’s red light district on Friday night. Men in the area had their pockets and bags searched, with several of their number being put into vans and taken to a local police station.

2. Yesterday, the government/religious authorities of Turkey issued a ‘fatwa’ that means something like its OK for a father to have lustful feelings, and possibly act on them, for his own daughter so long as she is 9 or something like that. I sent the original to our Turkish translator and hope to have it back soon. Protests by Turkish women have already begun. Here are links to them:

Protesting High Council of Turkish Religious Affairs Directorate’s fatwa, delivered by the directorates internet site following a question asking on whether a man’s having “lustful” feelings for his daughter would religiously invalidate his marriage with his wife, protests amounting across Turkey.

Despite the screenshot taken from the website of the Religious Affairs Directorate’s High Council on Religious Affairs and announced it was closing down its online fatwa service, various segments of Turkish society are increasingly continuing their protest the answer of the Turkey’s top religious body.

One anonymous user asked whether a father having sexual desire for his daughter would result in the cancellation of his marriage from a religious perspective.

The Diyanet posted an answer stating that there is a difference of opinion on the matter among Islam’s different schools of thought.

“For some, a father kissing his daughter with lust or caressing her with desire has no effect on the man’s marriage,” the answer said, referencing various religious sources.

The Diyanet cited the Hanafi school of Islamic jurisprudence as an exception, as it sees the daughter’s mother as “haram” (Arabic for “forbidden”) to such a man.

“Moreover, the girl would be over nine years of age,” it also said.

(Many languages use the term ‘MF’ as a pejorative. But what Islam institutionalizes is often so horrific we don’t even have a name for it)

(Dear Pseudo faux-feminists of the West. Watch well. This is what true courage and real feminism is. Watch and be deeply, deeply ashamed of yourselves) 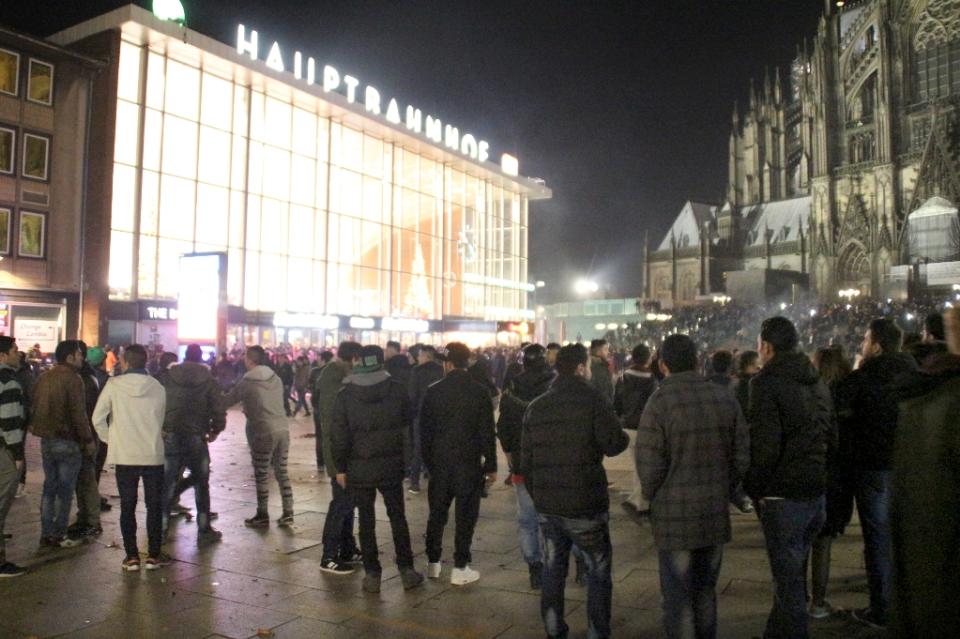 Berlin (AFP) – Cologne police said Saturday the number of cases filed over violence during New Year’s festivities had reached 379, and that asylum seekers and illegal migrants made up the majority of suspects.

“Those in focus of criminal police investigations are mostly people from North African countries. The majority of them are asylum seekers and people who are in Germany illegally,” police said in a statement, adding that around 40 percent of the cases related to sexual assault

5. Demo in Koln ( I think this is a useful idiot demo. I wish the rainbow flag people would try that in any of about a dozen Islamic countries)

(The irony here of course is when his immediate Liberal predecessor, a certain Jean Chretien, had his security guards spray pepper spray all over Canadian protestors against Chretien’s friend Suharto, dictator and mass murderer of Indonesia who was committing genocide against the Christians of East Timor for Islamic Jihad, he referred to it as “Pepper? Pepper is some ting I put on my plate its not a prob lem” or something very close to that. So the official position of the Liberal party is Pepper spray is no problem at all if sprayed at opponents of muslim supremacist apparently)

Prime Minister Justin Trudeau issued on his official Facebook page on Saturday, January 9, a statement denouncing the pepper spray attack aimed at Syrian refugees who attended a welcome event at the Muslim Association of Canada Centre in Vancouver.

CBC reported that the attacker was an “an unknown man on a bicycle”and as many as 30 children, women and men were treated for exposure to pepper spray by paramedics and the Vancouver Fire and Rescue Service.

“I condemn the attack on Syrian refugees in Vancouver. This isn’t who we are – and doesn’t reflect the warm welcome Canadians have offered,” Trudeau said.

(So the police of Koln were able to stop a demonstration of about 3000 people who were peacefully protesting the massive organized rape jihad of New Years Eve. But oddly were not able to stop the rape grope and rob by 1000 muslims on Silvester. Curiouser and curiouser)

New Observer correspondent in Cologne, Germany—More than 1,700 police, under orders from the German government, turned out to halt a 3,000-strong Pegida demonstration in Cologne city center today—a marked contrast to the paltry 150 officers who were sent to the same venue to counter the nonwhite refugee-criminal attacks on New Year’s Eve.

Here the police use water cannons to break up the PEGIDA rally. Water cannons. A striking contrast to what they used against the rapists. Which was nothing at all.

10. Video of pepper spray against the ‘refugees’

(I would want a native of Cologne to verify this. This is very next level if its true. Can anyone who is familiar with the city say definitively that this is what it purports to be?)

UPDATE: Nash Montana, our over worked German translator, has identified Cologne subway signs and all weapons seem to be German or modified German weapons. So this so far appears to be legit.

12. German Police Under Orders to Keep Refugee Crimes Off the Radar

The German police have been instructed not to announce crimes allegedly committed by migrants and asylum seekers, the German press reported on Friday.

The German police have been under instructions to cover up crimes alleged to have been committed by migrants and asylum seekers, reported German newspaper Das Bild on Friday.

“The terrible attacks of sex mobs in Cologne and other German cities have shaken the country. Now ever more crimes by refugees and migrants are coming to light,” wrote Das Bild.

As well as allegations from more than 100 women in Cologne that they were harassed, robbed or sexually assaulted on New Year’s Eve by gangs of men of Arab and North African appearance, the newspaper reports similar events in other German cities, reports of which came to light days only days later.

Thank you Kathy, M., Richard, Maria J., Wrath of Khan, Buck, Nash Montana, Gates of Vienna, Oz-Rita and many more and much more to come.

Just writing this blog can give one PTSD these days.