Danneels “called it a ‘mafia’ club that bore the name of St. Gallen. The group wanted a drastic reform of the Church, to make it ‘much more modern’, and for Cardinal Jorge Bergoglio to head it.”

Cardinal Jorge Bergoglio is Pope Francis. So this “mafia” cabal succeeded. They got their Pope who would help them impose a “drastic reform of the Church, to make it ‘much more modern.’” Why an institution that claims to transmit and preserve divine revelation would need to be “modern” remains unexplained, but clearly this palace coup heralded a significant change in the Church’s stance toward Islam. Pope Benedict XVI said this on September 12, 2006 at the University of Regensburg in Germany:

I was reminded of all this recently, when I read the edition by Professor Theodore Khoury (Münster) of part of the dialogue carried on — perhaps in 1391 in the winter barracks near Ankara — by the erudite Byzantine emperor Manuel II Palaeologus and an educated Persian on the subject of Christianity and Islam, and the truth of both. It was presumably the emperor himself who set down this dialogue, during the siege of Constantinople between 1394 and 1402; and this would explain why his arguments are given in greater detail than those of his Persian interlocutor. The dialogue ranges widely over the structures of faith contained in the Bible and in the Qur’an, and deals especially with the image of God and of man, while necessarily returning repeatedly to the relationship between — as they were called — three “Laws” or “rules of life”: the Old Testament, the New Testament and the Qur’an. It is not my intention to discuss this question in the present lecture; here I would like to discuss only one point — itself rather marginal to the dialogue as a whole — which, in the context of the issue of “faith and reason”, I found interesting and which can serve as the starting-point for my reflections on this issue.

2. Germany in a state of SIEGE: Merkel was cheered when she opened the floodgates to migrants. Now, with gangs of men roaming the streets and young German women being told to cover up, the mood’s changing

We paid a trafficking agent for false visas to fly here to Germany,’ says 34-year-old Atif. ‘We claimed asylum and came to Giessen camp with other migrants. Three weeks ago, because we had families, they gave us a proper home.’

Atif is well-dressed and speaks perfect English. He used to be a transport manager at Karachi airport and is from a well-to-do family. Between mouthfuls of curry, he adds: ‘But there is violence between political gangs in Karachi. Lots of people are leaving for Europe. The trafficker decided that Germany was the place for us because it is welcoming refugees.

3. German nurse faces eviction from council block where she brought up her children to make way for asylum seekers

A German woman is set to be evicted from the home where she raised her children on order for the local council to turn her block of flats into a refugee shelter.

Bettina Halbey received a letter earlier this month, telling her that she has to move out of her home-of-16-years in Nieheim, west Germany.

The 51-year-old nurse has been told that she has until May next year to vacate her flat, as Germany struggles to find housing for the thousands of refugees and migrants arriving in the country every week. Eviction: Bettina Halbey, 51, has been told that she has until May next year to move out of her flat in Nieheim, west Germany as the building is being turned into a refugee shelter

4. So how do you preserve the narrative when a successful black man in the US becomes a brain surgeon and a successful one, and then runs for high office and has a reality based platform? This is how.
5. Tanya from Denmark who often speaks at For Freedom demos in Copenhagen and Sweden spoke today at an EDL rally. Waiting for video

Here is an RT version of it. If nothing better shows up ill fix the audio and repost the speeches. 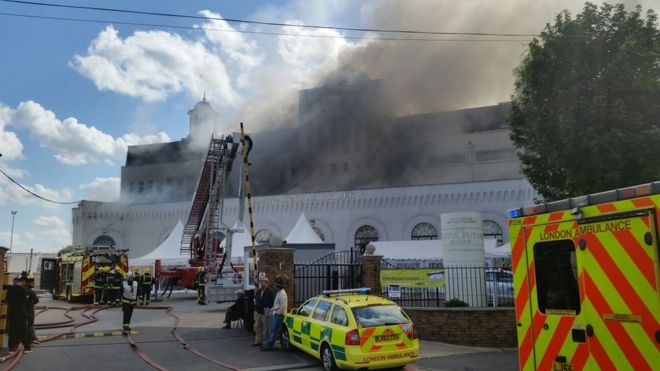 The Baitul Futuh Mosque in London Road in Morden, which describes itself as the largest mosque in western Europe, was being tackled by 70 firefighters.

London Fire Brigade said about 50% of the building’s ground floor was alight and the first floor was also on fire.

A London Ambulance Service spokesman said a man was taken to hospital suffering the effects of smoke inhalation.

(I guess a mosque is the last place in the UK you are allowed to smoke)
7. Queen of Jordan admits all muslims are terrorists
(If anyone else said what she said they would be in jail for terrorism or at the very least extortion or threats of violence. How is saying, ‘do what they want or they will commit acts of terror’ not terrorism?)

Take a few million of these people… or they’ll turn into terrorists and kill you. And hope they don’t do that anyway. At which point you’ll be stuck with a whole lot of terrorists anyway.

Jordan’s Queen Rania has used a speech in Berlin today to call upon Europe to help more Syrian refugees – and not to ‘bolt the door for fear of the unknown’.

That’s a great speech coming from the queen of a country that refuses to give its own “Palestinians” citizenship. Europe isn’t supposed to “bolt the door for fear of the unknown”. That’s a privilege reserved for her Hashemite kingdom.

9. Brian Lilley shows how there is an example in Canadian history that deals with religious people and their disguises.

2 Replies to “Islam pretty much dominates the public consciousness at this point: Links 1 on Sept. 26 – 2015”