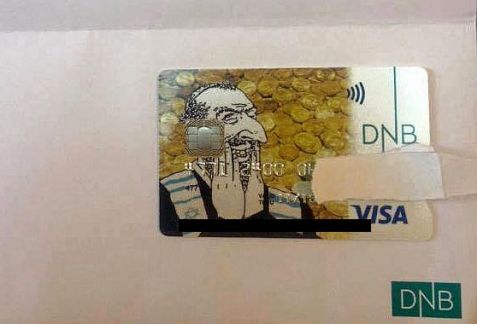 A cartoon bearded Jewish man with a long hooked nose wearing yarmulka and a blue and white tallit (prayer shawl) is seen chuckling with hands held to his cheeks in mirth. The caricature is set against a background of golden coins gleaming like treasure on the entire rest of the card.

An Australian citizen living in Norway who ordered the card claims that when he received it, he was surprised to find that the design he ordered was not what he received.

2. ‘That one has big breasts. But I want a Yazidi with blue eyes and pale skin. I am willing to pay the price’: Escaped girl, 18, tells of the day she was sold as a sex slave

A Yazidi teenager has told of the day she was abducted by ISIS thugs who tortured her, abused her, chained her up in the blistering heat and forced her to drink water infested with mice.

Jinan, 18, who escaped the terror group’s clutches, also claims they are running an international sex slave market where Christian and Yazidi women are traded like ‘livestock’.

ISIS fighters abducted her when they stormed Yazidi villages in northern Iraq last year and held her prisoner in the terror group’s stronghold of Mosul.

She miraculously escaped three months later and has now written a book in which she tells of her ordeal in excruciating detail.

Jinan describes how the extremists regularly took drugs and how the best-looking girls at slave markets were reserved for ISIS commanders or wealthy ‘clients’ from Gulf nations.

3. There are a lot of stories recently about unusually large fires and explosions everywhere from China, Japan, and here is France. There is no indication of cause in any of the stories that I have read, but it does seem quite peculiar that massive magnitude fires and explosions seem to be happening quite close together when just one of these events would have consumed the news for weeks a few years ago. This article indicates that local authorities believe its deliberately set but not much more than that and it will likely fade from public memory soon like the Chinese massive chemical factory blasts of which I believe there has now been three in the past 30 days. Something seems not right about it. Once again, flashing back to what is likely the largest explosion in Ottawa history last Oct. and about which there has not been a peep in the news about it since a few days after it happened.
It would be a safe guess that authorities know more about these things than they let on. Which means that there is a world war taking place which is being kept hidden from us. Personally I find that a peculiar and counter-productive strategy for the non-Islamic world.
4. Huma Abedin to Hillary on Benghazi: “I’m Giving You Credit for Inspiring the “Peaceful” Protests”

(Once again you see how communism works. They take your money and then absorb a ton of it to administer it, then bribe you with a fraction of what they took to agree to lose your rights in order to get back some of your money. It is a stunning thing that anyone does not treat this tactic the way they would from a common thief)

Officials from Austria and Germany said they were considering a plan whereby EU grant spending would be focussed on countries that take in most migrants, something that would put pressure on Britain and Eastern European nations that have so far refused to take part in migrant quota schemes.

Austrian Chancellor Werner Faymann said yesterday he was in favour of a scheme that would “reduce EU funding” to countries that took fewer migrants. He also indicated he could torpedo David Cameron’s EU renegotiation package unless Britain showed greater “solidarity” by accepting more migrants.

“When I think of the British, who have their own catalogue of demands, why should we do anything for them? Because, you have to say, solidarity is not a one-way street,” he told Austrian television.

German MEP Elmar Brok also toldTagesspiegel: “As a last resort, one could consider that there is more money from the EU Structural Funds for those member states that respond adequately to the situation of refugees.”

6. Ever notice that its the forced tolerance of the left who always implement “zero tolerance” policies on everything and everyone?

Figures show that Germany expects to accept 800,000 asylum seekers this year. In comparison Britain received 25,771 asylum applications in the year ending June 2015, according to the Home Office.

Now Germany has criticised Britain for refusing to take in more refugees with an aide to Angela Merkel saying he has no sympathy for one country orientated positions.

Stephan Mayar, a spokesman for Mrs Merkel’s CDU/CSU alliance, said that Britain’s insistence that it is ‘out of the club’ in sharing the burden of migrants entering Europe could harm David Cameron’s plans to win back powers from the EU.

(Wow Merkel sounds an awful lot like someone who believes in something like a transnationalist ideology doesn’t she?)

FARMINGTON HILLS (WWJ) – A Muslim flight attendant has filed a complaint with the U.S. Equal Employment Opportunity Commission (EEO) claiming she was suspended from her job for not serving alcohol — which is against her religious beliefs.

Lena Masri, an attorney for the Council of American Islamic Relations Michigan (CAIR), says Charee Stanley followed management’s directions, working out an arrangement with her coworkers to accommodate passenger requests for alcohol.

“We notified ExpressJet Airlines of its obligation under the law to reasonably accommodate Ms. Stanley’s religious beliefs,” Masri said at a news conference in Farmington Hills on Tuesday. “Instead, ExpressJet close to violate Ms. Stanely’s constitutional rights, placed her on administrative leave for 12 months after which her employment may be administratively terminated.”

Thank you M., Wrath of Khan, Tundra T., Buck, Gates of Vienna, Liberty Dk., and all and there is a pile more stuff to get through already today.

Normally I try and avoid US ‘Insider Baseball’ politics unless it crosses over into our areas of interest. Since Obama took office however, it has crossed over a great deal. But still. some things I try and leave out of the official posts as readers contribute a lot of important links to the comments on US politics, so anyone interested can easily find them. However it is impossible to not notice certain distinct trends. What appears to be leftist probable front groups for islamic groups like Black Lives Matter, not to mention Nation of Islam, and their agitation for a race war that under Obama has grown to real events that are the masturbation fantasies of Charles Manson. It is patently crazy. The reasoning is as horrific as the events they spawn. Marc Levin’s radio program yesterday, Sept. 1 2015 covered some aspects of the police murders and the various black activist groups behind them and Obama’s seeming complicity quite well. Its recommended listening but not right before a meal or bedtime.

2 Replies to “Antisemitism, slavery, forcing sharia in the USA, destruction of individualism, the gifts of the left and Islam: Links 1 on Sept. 2 – 2015”