Malmö in southern Sweden was last night hit by a fourth hand grenade attack in under a week – just 48 hours after another explosion rocked residents in a series of blasts in Sweden’s third largest city this summer.

The hand grenade detonated in a car park in the Malmö district of Värnhem early on Sunday morning.

The incident, which caused damage to dozens of cars but no injuries, was different from previous blasts, according to police.

“Many of the other grenade attacks seemed to be aimed at government buildings,” a police spokesman told Swedish newspaper, Aftonbladet.

“But in the area around this detonation site there are private residences, business premises and government agencies. Therefore, the goal of the blast is unclear at present,” the spokesman concluded.

2. Here is an amazing BBC video showing a stunning sanctimony and anti French attitude. Really horrifying how they seem to not just equate the aggressor and the victims but somehow make the aggressor into the victim and the defenders into a manifestation of evil. The banners they use, ;Je Suis Charlie Martel’ would make a great T shirt though. Must find a graphic.

The Taliban have seized a police base in northern Afghanistan and captured scores of officers after three days of fighting, officials say.

More than 100 officers surrendered at the base in Badakhshan province. They were released after reportedly handing over their weapons.

The surrender was the largest by Afghan security forces since Nato ended its combat mission in December.

The Taliban have stepped up attacks during their annual spring offensive.

4. Terror on Chinese flight as passenger tries to start fire ‘with petrol and lighter’

The passenger attempts to set a fire using petrol and a cigarette lighter. Photo: Weibo

A man tried to start a fire on board a Shenzhen Airlines flight early on Sunday but was restrained by cabin crew and passengers, mainland Chinese civil aviation authorities said.

A passenger told Zhejiang-based Dushi Kuaibao the incident happened about half an hour before landing, and the man tried twice to start a fire.

Several crew and passengers tried to control the man and he was pushed into the first-class cabin, where he set fire to a newspaper. 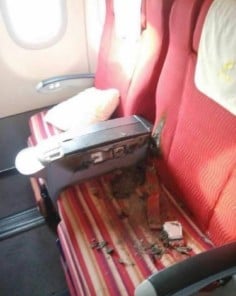 Photo posted on Weibo of damaged seat on Flight ZH9648.Passengers threw their bags at him, and he was restrained. “The whole incident lasted about 20 minutes,” the passenger said.

A girl aged about 10 has carried out a suicide bombing in north-eastern Nigeria, killing at least 16 people, police say.

The attack took place near a crowded market in the city of Damaturu in Yobe state. About 50 people were wounded.

No group has said it was behind the attack but Islamists Boko Haram have been blamed for similar bombings in recent months. Turkish jets struck camps belonging to Kurdish militants in northern Iraq this weekend. This was Turkey’s first strike on the Kurds since a 2013 peace deal.

Americans and British soldiers are fighting with Kurds against ISIS.

as an additional thought, In this speculative article about Iranian side deals, there is nothing that contradicts facts already in evidence.

12 Replies to “Sweden has grenade infestation, Obama OK’s bombing US and British troops with the Kurds and more: Links 3 on July 26 – 2015”