1. Probably everyone has seen this already but if you haven’t seen this anti-Obama rant, articulately and accurately done, its worth seeing as much for the content as to drive the numbers of views up. Lets make the legacy media who sold out to the Obama administration, take notice that the views of this woman equals or exceeds the viewers of stations like MSNBC who are pretty much just agents of the state and purveyors of the Narrative, rather than members of the 5th estate.

2. ISIS bans private internet access in Raqqa in a crackdown on spies and activists revealing the terror group’s daily atrocities

(…because in utopia, its critical to control every thought and word that your citizens may utter and most of all, never let them leave)

Militants fighting for the Islamic State in Syria have banned private internet access in its de facto capital Raqqa in a crackdown on spies and activists revealing the terror group’s daily atrocities.

The move means everybody living in the terror stronghold must now use internet cafes operated and monitored by ISIS officials if they want to communicate online.

The ban will affect not only affect brave activist groups like Raqqa is Being Slaughtered Silently, which documents ISIS abuses in the north Syrian city, but also potential defectors trying to arrange for their safe departure out of territory held by the terror group. 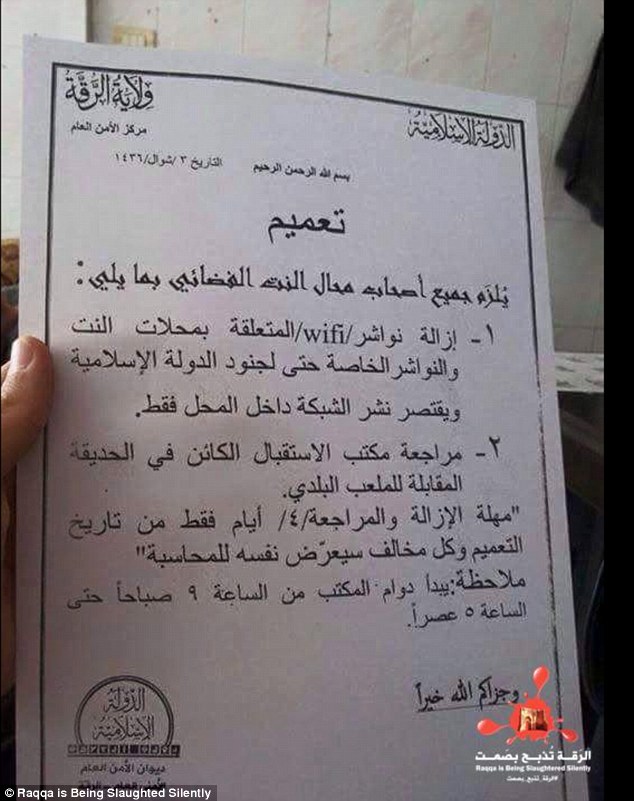 3. Interview with gun store owner that won’t sell to people who’s ideology requires them to kill us all, and yet is being treated like he is the problem

(This man makes a stunning statement of fact. That he is granted the right to refuse service to anyone for any reason whatsoever should he feel that they should not own a firearm. This will be immediately challenged of course by people who feel Christians do not have the right to refuse service to homosexuals for a wedding cake. The resultant trial of competing ‘rights’ should be quite interesting and dramatic)

(Airstrikes in in scare quotes because Obama has made sure that any actual bombing has to be personally approved by him, and interviews with pilots in the area say that there are hardly any flights and far far fewer actual bombings and most flights circle for hours doing nothing then return to base with full payload)

(These guys dont get it. Erdogan probably paid them to take out these Kurds)

Imam Mazin Abdul Adhim, a senior cleric of Hizb ut-Tahrir – Canada, calls upon the Muslim Ummah (Nation) to unite in order to establish the global Islamic state, also known by its Arabic name the Caliphate.

The London, Ontario based Imam, vehemently opposes the Caliphate founded by ISIS in Iraq and Syria and does not accept the authority of its self proclaim Calif Abu Bakr al-Baghdadi. Rather he advocates for a new Caliphate that will implement the Islamic Law word for word and extend its authority over all the Muslim lands.

In a video clip on the occasion of Eid al-Fitr (July 17, 2015) at the end of the month of Ramdan, Imam Abdul Adhim explained that the Muslim Ummah is one body, and all its woes in the different parts of split up Muslim lands are originated only from the lack of a home for Islam and the absence of an Islamic regime that is able to represent the Ummah, as all Muslim regimes today are “traitors” or serving the interest of the “enemy” (the picture of US President Barack Obama was shown in the background).

The only solution, said Imam Abdul Adhim, is to call for the implementation of the teachings of Islam as a whole, to teach the Ummah about the Islamic ruling system, the economic system, the social system,

the foreign policy etc. and categorically rejecting the idea of secularizing Islam. Abdul Adhim’s role model is Muhammad, the Prophet of Islam, who brought about a political change by first founding a group of supporters, then changed the beliefs of the society and later changed the political loyalties in society and of the army.

The Germans were not happy: A German central banker warned of dire problems should the new government call the country’s aid program into question, jeopardizing funding for the banks. “That would have fatal consequences for Greece’s financial system. Greek banks would then lose their access to central bank money,” Bundesbank board member Joachim Nagel told Handelsblatt newspaper.

Well, maybe…. Unless of course Greece finds a new, alternative source of funding, one that has nothing to do with the establishmentarian IMF, whose “bailouts” are merely a smokescreen to implement pro-western policies and to allow the rapid liquidation of any “bailed out” society… Which naturally means that now Russia (and China) are set to become critical allies for Greece, which would immediately explain the logical pivot toward Moscow.

8. Shining a light on FGM in GB

Thank you Buck, M., Shabnam, Wrath of Khan, Richard, Johnny U. and many more. More to come and much work to do,

7 Replies to “Ratcheting up the totalitarianism while Western leaders get more shrill denying the ideology which drives it. Links 2 on July 21 – 2015”