1. Is the US planning to create the same situation with Iran it did with North Korea?

Sherman negotiated the US’s nuclear pact with North Korea in the 1990s. The North Koreans used the deal as a smokescreen behind which they developed nuclear weapons while receiving financial assistance from the US which paid off the regime for signing the deal.

Once Pyongyang was ready to come out as a nuclear power, it threw out the nuclear inspectors, opened the sealed nuclear sites, vacated its signature on the Nuclear Non-Proliferation Treaty and began testing nuclear bombs.

Sherman is now the US’s chief negotiator in the P5+1 nuclear talks with Iran.

2. Terrorist attack in Israel, man runs over 5 police with car then goes on stabbing spree.

3. The Ottawa Citizen, one of the newspapers in Canada with the most gravitas, concedes that some muslims define jihad thusly in an article about the soon-to-be-released video of the muslim who attacked Parliament hill:

He spoke just long enough to talk about the actions he was soon to take, and put them into the context of “jihad,” the Arabic word for struggle that is associated — moderate Muslims argue wrongly — with a struggle against non-believers. He took aim at Canada’s foreign policy, threatened the Canadian military and invoked “Allah.”

“@(O: Jihad means to war against non-Muslims, and is etymologically derived from the word mujahada signifying warfare to establish the religion. And it is the lesser jihad. As for the greater jihad, it is spiritual warfare against the lower self (nafs), which is why the Prophet (Allah bless him and give him peace) said as he was returning from jihad.”

(In other words, jihad is legally defined in islam as military expedition against unbelievers for the purpose of inflicting them with islamic rule. The desperation of media to assist an enemy of freedom of speech will baffle future historians for centuries. Unless we lose. Then it will all look like Allah’s will.)

4. Muslims from the IS take their war against ‘the time of ignorance’ seriously. This article covers some of that. This blog has many articles showing how where muslims control the territory sufficiently they will destroy all evidence of pre-islamic life as a requirement by islamic law.

5. Confusing article about the culling of books at the Concordia jihad library.

“Are we going back to the dark ages?”

(Would you trust that guy to pick which books your kids should read?)

7. Gay man surprised that onlookers just stand there and watch as muslims drop homosexuals from building and stone them. This may be one of those times where that tired poem about, ‘they came for the Jews’ is actually appropriate. Suddenly islamic rules means something to him.

Fierce clashes are taking place in the Syrian city of Aleppo, near the Air Force Intelligence facility attacked by rebels on Wednesday, activists say.

A security source was quoted as saying that government forces had launched an assault on rebel positions in the west of the city on Thursday morning.

There was no immediate information on casualties.

9. Boston Marathon bomber admits he did it. 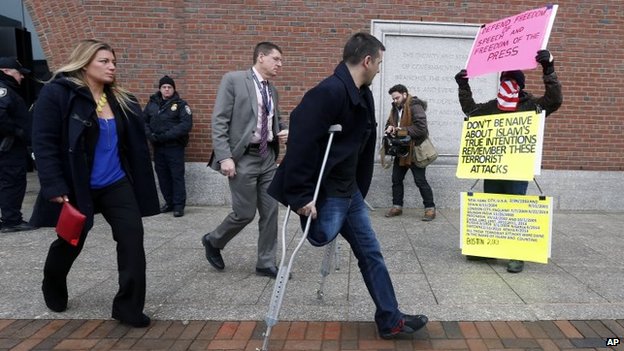 Suspected Boko Haram militants have killed at least 45 people in a village in Borno state, north-east Nigeria, witnesses have said.

The gunmen who stormed Njaba targeted men and boys before setting the village on fire, survivors added.

The raid happened early on Tuesday but was not reported immediately because of the remoteness of the area.

Boko Haram has killed thousands of people in its drive to establish an Islamic state.

(Wait did I read that right? Did the BBC say something true? Check back later to see if it changes to the narrative)

11. Nonie Darwish on The Glazov gang discusses Obama and the koran

Thank you M., Don C., Jihad Watch, Wrath of Khan, and everyone who sent in materials. More to come.

78 Replies to “Perhaps one has to understand what tyranny looks like to appreciate freedom: Links 1 on March 6 – 2015”