1. The peace tunnel in Toronto had only one clue as to who built it. Clearly this was meant to launch a terrorist attack by Catholics who support our war vets.

2. Eight shot dead in a restaurant in the Czech republic. (Gunman also killed but no one thought to ask his name first)

(Sky News twitter feed on this here as well)

15.33 The BBC report that the gunman was described as “mindless shooting”.

15.30 Milan Chovanec, the interior minister, said on Twitter he is on his way to the scene.

15.26 The Czech prime minister, Bohuslav Sobotka, has said he is shocked by the attack, according to local media.

3. Father attacks teenage daughter with a belt after she etches the name of a boy on her arm – then orders her to remove it with a heated KNIFE

(I think the clue in this article is that: “The ‘zealous’ assault was only discovered when a teacher at the girl’s school noticed her injuries. When asked about the incident the father still did not understand what he had done wrong.”

France, Belgium and now even liberal Denmark regret letting in so many immigrants from Muslim countries. Their swelling Islamic communities have become breeding grounds for terrorists. So why is the U.S. opening the floodgates to foreign Muslims?

The threat Muslim immigrants pose to homeland security was not addressed during the White House’s three-day summit on terrorism.

Instead, Vice President Joe Biden assured Muslim groups gathered during one session that the “wave” of Muslim immigration is “not going to stop.” 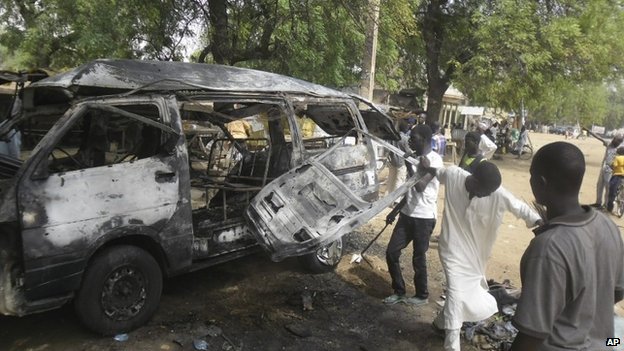 A bomber first struck in Potiskum, and hours later a second attack took place in Kano, the main northern city.

Hospital sources said 17 people were killed in Potiskum while police put the number of dead in Kano at 10.

If the Obama Administration is serious about making progress in defense of America’s best interests, the President and his national security team will forthwith request resources from Congress to rid Nigeria of the scourge called Boko Haram, while also swiftly implementing a robust plan to crush the Islamic State, what remains of Al Qaeda, and other adherents of radical Islamist jihad.

Horrific as reality now appears inside Somalia, Afghanistan, Iraq, Syria, Libya, and Yemen (places where America so far has intervened without achieving victory), Nigeria and Boko Haram present another vexing set of threats that America and what remains of the civilized world cannot ignore for much longer.

The case against Boko Haram is not nuanced. It is unambiguous. This band of Islamic rejectionists denies all benefits from modernity and commits unspeakable atrocities. In doing so, Boko Haram is already a potent threat to oil-exporting Nigeria, to neighboring African nations, and potentially to the entire world.

Narva military parade with US presence this morning video here

Madrid (CNN)From Spain, they used the Internet and social media to recruit and indoctrinate young, potential Islamist militants to work for ISIS.

They even attracted Facebook followers as far away as Latin America, the United States, Belgium and France.

But on Tuesday, Spain’s Civil Guard forces arrested four suspects in different parts of the country suspected of recruiting for ISIS, the Interior Ministry said in a statement.

Two key suspects were arrested in the Spanish enclave of Melilla, on Morocco’s north coast — where previous arrests for Islamist militant activity have occurred.

Those two, who were not immediately identified by authorities, translated ISIS material to Spanish, and their recruitment targets included women.

9. VICE News once again carries water for the far left and now the irrational Anti Israel crowd. Lots and lots of water. Except it doesn’t exist. As in the picture, the buckets are empty. As they say, there are lies, damned lies, and media reporting on Israel.

Thank you UK Pete, M., Richard, Wrath of Khan, Charles O., Tundra T., and all. More to come including some interesting testimony to the Canadian Senate committee on National Security by a woman who is high up in the CAIR echelon but did not bother to inform the committee that she in fact was with them at all.