1. Jihad Watch on the Michigan muslim who stabbed 2 people for not being muslim and admitting it. (Will Obama say anything about this one in a direct way?)

European officials have confirmed that the US State Department cautioned them against providing Israel with sensitive information on the current round of negotiations with Iran over its alleged nuclear weapons program, The New York Times reported Tuesday. 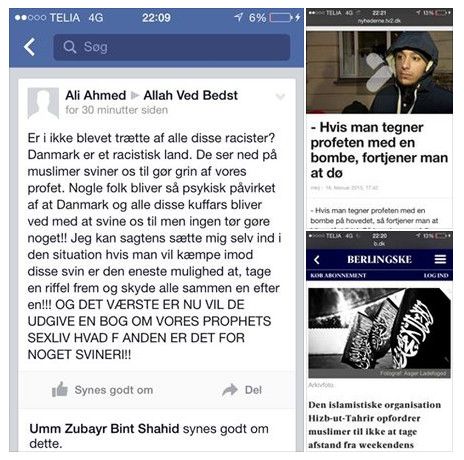 TRANSLATION: Aren’t you tired of all those racists? Denmark is a racist country. They look down on muslims, shit on us and mock our prophet. Some people get so psychologically affected by Denmark and all the kuffars who consistently shit on us but they don’t dare do anything!! I can easily imagine myself in a situation that if you want to fight these pigs, the only possibly is to take a rifle and shoot them all one after one!!! AND THE WORST THING IS THAT THEY WANT TO PUBLISH A BOOK ABOUT OUR PROPHET’S SEX LIFE. WHAT THE HELL KIND OF SHIT IS THAT!!!

mmigration Canada reports that Canada has admitted about 250,000 immigrants per year for the last five years.

(It would appear that a British judge has reversed a decision by a council to take a child away from a parent based on a thought crime. There is another article on this here at the DM where the headline is more accurate as well)

6. Geert Wilders Calls Again for the De-Islamization of the Netherlands

In the face of the growing Islamic threat in the nation of the Netherlands, Member of Parliament Geert Wilders continues to stand and fight for the de-Islamization of his home country. Wilders addressed the Prime Minister for the lack of action by the government to close their borders and stop the Islamization of the Netherlands. In May, Wilders will be the keynote speaker at a free speech event featuring a Muhammad art exhibit in Texas.

(I don’t really understand at one level, why it is even news for someone who is a leader of people to say something so extraordinarily obvious in terms of policy required to protect the people he leads. Shows how deep inside the socialist termite nest we are)

MONTREAL – The leader of Coalition for Quebec’s Future said Tuesday all mosques should be investigated prior to being allowed to open in the province.

Francois Legault, head of the third-most popular party in Quebec’s legislature, said a public body should be created to investigate people who potentially disagree with so-called Quebec values.

Legault said the body would be able to find out if “applicants (for mosques) have consistently denigrated Quebec values.

8. News video on trial of jihadis in Canada who wished to commit mass death attack. Defense tries to make a farce of it.

21 Replies to “The vast majority of moderate muslims show their support to the West by a total failure to do anything at all: Links 1 on Feb. 18 – 2015”