On vlad, and on some other sites recently there has been discussion about using the dhimmi term, ‘The Prophet Mohamed’ when referring to the founder of islam.

This is of course, pure submission. Its not like you hear the same journalists or fellow travelers at the coffee shop etc. referring to, ‘Our Lord and Saviour Jesus Christ’ etc. unless they are devout believers. And even then only some of them.

So what do we call him?

Well I think we should go with historical and even mythological truth as, at least once upon a time in Canada, truth was an absolute defense. So let’s have a look at a couple of basic and easily verifiable truths about Islam’s founder.

1. Mohamed dyed his beard red. According to this site it was for a few reasons. He dyed it to look other than Christian or Jewish, and dyed it red to signify being at war.

2. Mohamed funded his nascent army by raiding desert caravans, stealing the contents and doing what he would with the staff. I won’t provide a link. Do google searches. This is too important for a single link I pick. Mohamed funded his gang and its rules and its take-over of vast territories by raiding other people’s wealth achieved by civilized cooperation and hard work. He paid his army by offering them a percentage of whatever they could steal from unbelievers providing that they kicked up the requisite amount to him and eventually his generals and then those who represent him in the hierarchy, typically called ‘Caliphs’.

So how do we refer to the founder of Islam without being deliberately vulgar and relying 100% on truth as presented not just by accepted history but by muslims themselves in their most holy and authoritative scripture? 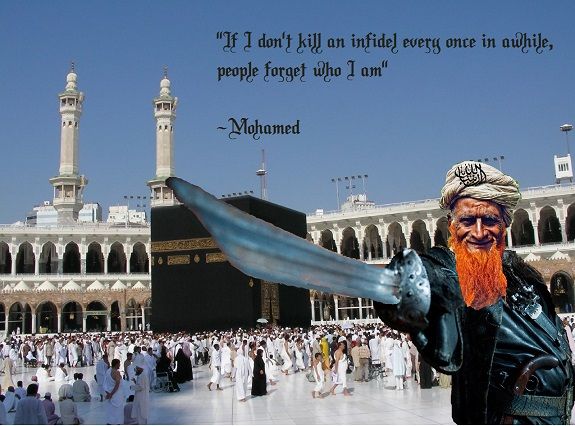 Thank you Tundra Tabloids for this historical recreation photo

21 Replies to “The ‘Prophet’ Mohamed dilemma”