1. All eyes on embattled Slaviansk

2. This picture is alleged to be from Australia. Oz-Rita, our translator from French and German believes she recognizes the area and says it is near a very large mosque in Lakemba, the big Sydney mosque. 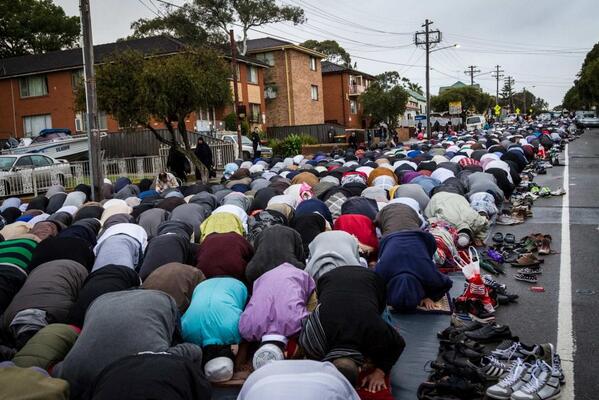 Personally I am A-OK with this. Because if its OK for them to pray in the streets, then it should be just fine for us to drive through their mosques.

3. The newly appointed Libyan Prime Minister Abdullah al-Thinni is stepping down after he and his family were attacked by a militia.

Mr al-Thinni was only confirmed as PM last week after Ali Zeidan was sacked for failing to improve security.

(Makes you wonder if maybe its not to late to use the paddles on Kadaffi. Call Dr. House!)

5. Iranian man who buries his one year old twins due to ‘family dispute’, likely with 20 year old wife, will not be punished. Below, a translation from this article by Shabnam A.

According to reports from Khoozestan region, Iran, a 30 -year-old man married to a 20 -year-old woman buried his one-year-old twins alive due to having
“family conflict “.

And According to Article 220 of the penal code of Islamic Republic of Iran, the child’s father and his father are exempt from criminal prosecution and ‘Ghesas’ [literally, aneye for an eye] if they kill their children and they are only liable for the payment of blood money (Diyeh) and flogging. But in contrary, if a woman kills her children, she is subjected to criminal prosecution and Ghesas in which she will be sentenced to be hanged.

(Reliance of the traveller, the most authoritative book on islamic sharia available is quite clear that a parent may kill a child without retribution, especially if the child in some way goes against islam)

6. How are the mentally ill treated in Morocco? At least the ones who go for the Islamic cure. The ‘beat the Gin out of the Joint’ style.

7. FGM in Ethiopia. CAUTION: FGM stands for FEMALE GENITAL MUTILATION. It’s done by muslims on girls just before puberty. This is what you will see in this video. I do not recommend watching it if you are unclear about what it is.

Thank you Wrath of Khan, Fjordman, M, and all. Sorry about this, but more to come.