1. US forces set to redefine roles for last remaining effective combat troops. (I don’t really understand what the admin is saying, but it smacks of ‘community organizing’)

2. Bill Warner speaks on how churches may be the best bulwark against encroaching islam.

(What does Kenya know that we don’t seem to be willing to admit to knowing?) 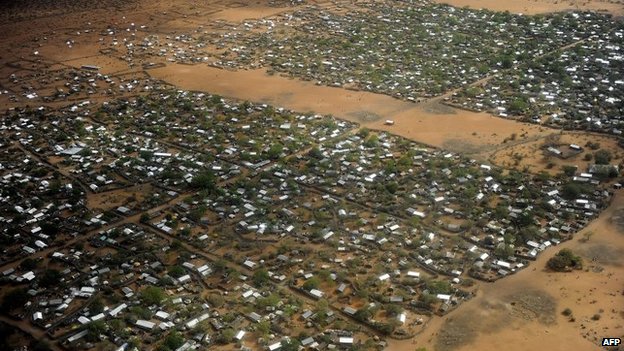 Some half a million Somalis live in the Dadaab refugee camp

Kenya has ordered all urban-based Somali refugees to move into designated camps in a bid to end attacks by militant Islamists.

Interior Minister Joseph Ole Lenku said the directive had been issued because of the “emergency security challenges” facing Kenya.

A refugee group condemned the decision as illegal.

Somalia’s al-Qaeda-linked al-Shabab group has carried out a spate of attacks in Kenya in recent years.

4. Leader of Egyptian Military announces candidacy for president of Egypt.

5. US response to Egyptian trial verdict.

(She isn’t entirely wrong but it may be entirely necessary)

6. Hate crime hoax at US university. Woman who reported anti-black graffiti wrote it herself. Meanwhile, this could very well be a real hate crime. But as the victims are not described we can’t know for sure. All the attackers are black and there is nowhere in the report where it lists what they said if anything, or what the victims look like. Read it and offer your best guess. One thing is for sure. The girl did not bash her own teeth out with a brick while walking home from school.

(If memory serves, Henry II  had something wise to say about  turbulent clerics)

Sheikh Yasser al-Habib spent £2million buying a disused hall in Fulmer and turning it into a mosque which is also the base for his controversial satellite TV channel.

Last week, Ofcom revealed it was powerless to stop the cleric’s incendiary broadcasts, which are said to stir up conflict between al-Habib’s Shia sect and rival Sunni Muslims.

8. After 44 Years, This European Country Is Finally Getting Its First Mosque

(Yeah cause you know, we are the intolerant ones)

Like Croatia, Bosnia-Herzegovina has a significant Islamic population with its own cultural and religious touchstones. The Ottoman conquest reached almost to the eastern gates of Vienna in the 16th century, and Slovenia, south of Austria between Italy and Hungary, remained a holdout. As a result, she says, “there is still that idea of Islam as totally other, as dangerous, you know, with all these stereotypical ideas and images.”

Not even a full 24 hours later, unfortunately, the campaign for them to cancel is already in full force.

(To the BDS protesters. Might I suggest the following?)