1. Richard pointed out to me an article on how Obama cancelled a program similar to the now-deployed Israeli one, which has a high success rate of knocking down incoming missiles by laser. A far cheaper and probably easier solution than Iron Dome, which I always thought of as a bad idea even if it is a technical marvel.

I didn’t post it immediately because when you read some of the material there is a hint of reason to them. If they can’t get it to work, cut the funding. Fair enough. But then when you add it to this story you start to see a policy of weakening the US military rather than a rational approach to defense spending.

When a police patrol went to carry out a drug screening of a suspected gang of youths in the immigrant-dominated Gothenburg district of Bergsjön it ended up with two of the police officers knocked down and beaten with punches and kicks.

Several of the gang managed to flee the scene but two of the gang members, 18 and 21 years old, were apprehended and are now suspects in assault and assaulting a police officer. 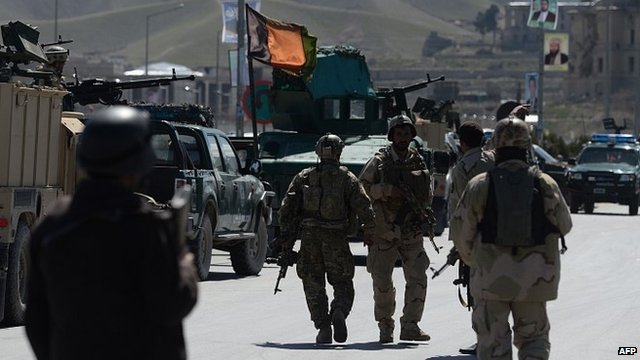 The Taliban have launched a gun and bomb attack on an office of the Afghan election commission in Kabul, less than two weeks before presidential polls.

Two policemen were killed and two others wounded in the battle with the insurgents, the interior ministry said, adding that five gunmen were also dead.

There were no immediate reports of casualties among election workers.

The Taliban, who have vowed to disrupt the 5 April vote and are boycotting it, said they carried out the attack.

(This is a story worth following. Something quite peculiar about it. More here)

The suspect was a civilian who had access to be at Naval Station Norfolk, spokeswoman Terri David said early Tuesday. She said she couldn’t say whether he had permission to be on the USS Mahan, where the male sailor was shot about 11:20 p.m. Monday. The flag of Pakistan was raised at the Town Hall this morning (Friday 21 March) to commemorate Pakistan Day.

The flag was raised by Mayor of Rochdale Councillor Peter Rush. The ceremony was attended by local dignitaries including Rochdale MP Simon Danczuk, Leader of the Council, Councillor Colin Lambert and local councillors.

Ghulam Rasul Shahzad OBE, who arranges the flag raising every year, said: “It is about our heritage and providing information to the local community. It is also about our youngsters as well because they are the future.” Students from Rochdale Girls School at the flag raising

Thank you Wrath of Khan, M, Fjordman, GoV, Andrew Bostom,  Richard, and all.

Most likely there will be more. Tis after all, the time of the ‘Chinese Curse’