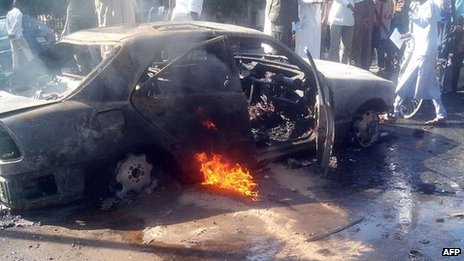 A car bomb has exploded in the north-eastern Nigerian city of Maiduguri, killing at least 17 people. The Islamist group Boko Haram said it carried out the attack. A suspect has been arrested, the military says.

“The changes that have occurred due to global warning are too small to account for,” he told WBZ-TV. “It has nothing to do with global warming, it has to do with where we live.”

Lindzen endorses sensible preparedness and environmental protection, but sees what he terms “catastrophism” in the climate change horror stories.

“Global warming, climate change, all these things are just a dream come true for politicians. The opportunities for taxation, for policies, for control, for crony capitalism are just immense, you can see their eyes bulge,” he says.

(Of course he is spot on. I see ‘global warming’ as the secular equivalent to Christian ‘Revelations’.)

4. Welfare for Immigrants: EU Wants Fortress Germany to Open Up

Brussels is demanding that even foreigners who have never worked in Germany should have access to the country’s unemployment benefits if they hail from an EU member state. The EU is firing Germany’s already overheated immigration debate.

H/T M, Oz-Rita, Fjordman and many more for informing links. More to come.