…a senior Palestinian Authority official has told Syrian TV that any agreement will simply be the “first stage” in eradicating Israel altogether.

2. The Islamic example has begun to work it’s way into England in quite an interesting way. This is without question an aspect of multiculturalism, and why all cultures and people must discriminate between what is a desirable culture and what is not.

3. Freedom of speech wins in at least one US courtroom.

Attorney Joe Sibley just won my First Amendment court case, Friday, January 3, 2014 here in Oklahoma City. The Oklahoma District Court case (No. CJ-2011-5510), filed on August 8, 20011, was resolved with a summary judgment from Judge Thomas E. Prince. I filed against the protesters who interfered with my speaking engagement with American Renaissance. The story of the outcome of the case was presented in impressive detail by OccidentalCulture.com, then summaries appeared in AmericanRenaissance.com, and by VDARE.com. Many thanks to these sites and their watchful eyes. This is indeed a great occasion for lovers of free speech.

4. The photo below is alleged to be of a muslim jihadi trying to protect the only organ he cares about so that somehow, it will survive his death and be useful in Mohamed’s pretend brothel in the sky. Notice he does not wear a helmet. 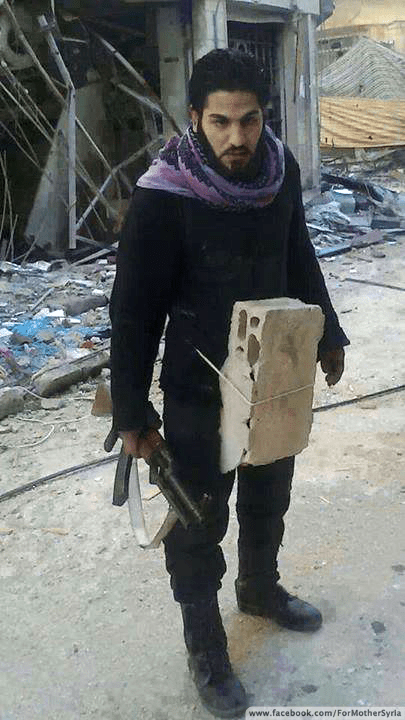 Guns to be used in attacks captured by the IDF in Hebron. Photo: IDF

A weapons cache that exploded inside a locked safe at the site of the future Palestinian Authority embassy in Prague was entirely unregistered, and the illegal cache may be just the tip of the iceberg of a Europe-wide weapons smuggling ring, according to Czech officials. The sources made the allegation in interviews with Czech-language Aktualne.cz, which were translated by the Elder of Ziyon blog.

Thank you UK Pete, M, Fjordman and all who sent in material. More to come.