1. Probe into one of George Galloway’s charities underway

The Charity Commission said it had opened a statutory inquiry into Viva Palestina. 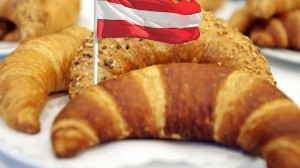 Whether the alleged origins of this bread snack are true or not I consider this news item to be very important in that it reveals a critical and little-understood feature of Islam.

In this fatwa it is freely admitted that the curved bread was made as a symbol by the Europeans to celebrate the defeat of invading islam. It is forbidden in islamic areas because it represents the failure of muslims to conquer and dominate others. In other words, this illustrates the islamic concept of defense. Something Westerners typically can’t wrap their heads around. The idea that people who defend themselves against islamic jihad are offending islam and therefore, doubly deserving of being conquered etc.

3. Obama administration runs interference on interview of last surviving Benghazi defender of the Embassy. Click over and watch the video at Fox.

4. Finish government attempts to remove its own documentary on treatment of women in Islamic Egypt, then is forced to reinstate it. For now.

5. Gang of 8 or so, what appear to be muslims, beat and stab a man in a Danish parking lot. The victim isn’t talking. Video at this site and translation later.