An original translation from an Italian News site by Gaia: (H/T M)

Morsi: “Free me and I will go into exile” – is the proposal of the former president deposed in the July 3 “coup , appealing to all protesters to leave the streets 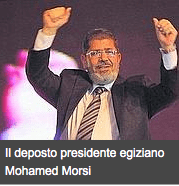 “Free me and I will go into exile” . This is the gist of the request made by Mohamed Morsi, the Egyptian president deposed on July 3 by the military and then detained. He sent a letter to the High Command of the Armed Forces calling for his release and the opportunity for himself and for all members of his family, to leave Egyptian territory. The former president also addressed an appeal to all the protesters to leave the streets , writes the newspaper al-Watan.
HANDWRITTEN LETTER
In the letter, handwritten and sent by one of his also detained advisers , he asks for the” liberation of the leaders of the Muslim Brotherhood prisoners and the cancellation of any legal proceedings against him, “the newspaper reported. Sources claim that the request of the deposed president has already been rejected by the military, who indicated to him that ‘the decision is up to the Egyptian people. “