Counter-terrorism officers are investigating a suspected nail bomb attack outside a mosque in the West Midlands, Sky sources say.

Several streets have been sealed off by police after residents reported hearing a loud bang in Tipton around 1pm.

Police said the explosion is being treated as a terrorist incident and some residents have reported finding nails and other debris in the area. 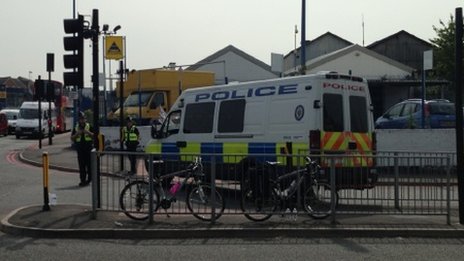 West Midlands Police were called to Binfield Street, Tipton, at about 13:00 BST
Part of a town has been sealed off by police after reports of “a loud bang” near a mosque in the West Midlands.

Police, including counter terrorism officers, were called to Binfield Street in Tipton at about 13:00 BST and have since cordoned off the area.

Residents reported finding nails and debris but there are no reports of any injuries, West Midlands Police said.