1. Interesting interview from Danish TV on the mission by all the foreign jihadis in Syria allegedly fighting a civil war to implement a sharia state as part of a caliphate.

2. US president Barack Obama goes to spot close to wear Reagan told a massive audience to “tear down that wall” and speaks to a small but polite audience from behind his own plastic one he appears to have brought himself.

In stark contrast to that of his presidential predecessors, Barack Obama’s message on Wednesday was pure mush, another clichéd “citizens of the world” polemic with little substance.

3. Pat Condell’s latest and excellent video has cost him his account at Vimeo and absurd warnings on Youtube as if it was a violent or pornographic video. We have finally reached the state of Orwelianism where the state feels the truth is what is dangerous and the distractions of sexually appealing material should be presented wherever and whenever possible. In a way, Im surprised it took this long. Here is the actual video if anyone has not already seen it. Check the links above for what each web-host did to him because of it.

4. Here is a startlingly frank piece on why men have opted not to get married in the Western world these days. Someone at the Huff Po, has actually decided not to go with the wildly inaccurate and also, not helpful crypto-explanation of men being unable to grow up and going with the facts, which are closer to, they would have to be crazy to do so. Below, the comment I attempted to post at the site and simply couldn’t get through the process.

At last. Someone actually bothered to look at the facts. I am a little shocked by this as typically, politically correct and gender feminist leaning publications, which is to say nearly all of them, want to blame a fault or failure in men for this. Of course while this always works, it does not assist in solving the problem but proving the point. The point which is, ‘Men do not marry because there is nothing in it for them’ even to the extent where they have to be a little crazy or a little stupid if they do.

And the way the laws work, a woman who has a husband with wealth or a good job is a little crazy or stupid if she stays with him as she can enjoy all that wealth and income with no strings if she just leaves him.

Another interesting study might be to discover if these principles apply only to traditional men from European and North American Western culture which has been targeted so well by the Marxist cultural narrative. I bet no muslims find themselves in courts in Canada or the US and find the same results non-Muslim indigenous (European) men do.

5. Interesting news report from Scandinavia of a hate crime against an actual indigenous woman there. This is a screen cap from Google Translate from this original site. 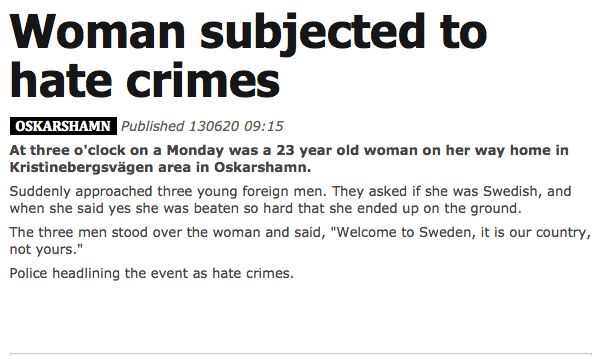