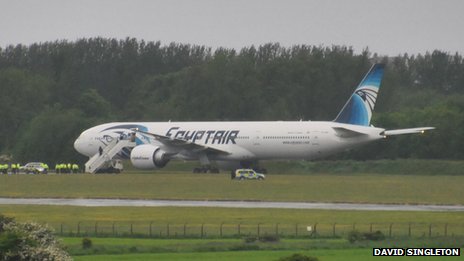 An Egyptair plane from Cairo to New York has landed at Glasgow Prestwick Airport after being diverted.

BBC producer Nada Tawfik, a passenger on board, said she saw a note with the words “I’ll set this plane on fire” and a seat number.

Egypt Air flight 985 – which was travelling to JFK International Airport – touched down at around 14:30 BST.

The Ministry of Defence confirmed that RAF Typhoon aircraft were called following an “incident on board”.