Gates of Vienna continues to expose the legacy media for what it is.

Fjordman’s latest essay concerns the contrast between media coverage of the massacre in Norway by Anders Behring Breivik, and the kid-glove treatment granted the Toulouse murderer Mohammed Merah.

Two Terrorists and a Double Standard
by Fjordman

The mass murder committed by Anders Behring Breivik during his twin attacks in Norway in 2011 understandably attracted a lot of media attention. ABB claimed to represent a much larger organization called the Knights Templar, which triggered a massive hunt for potential accomplices at home and abroad. Not a single trace has been found of this organization, which is most likely a figment of Breivik’s vivid imagination. 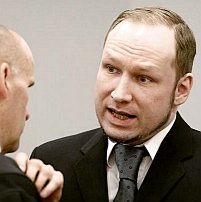 While it is understandable that such a claim had to be checked, in hindsight it comes off as highly questionable that the mass media in multiple countries launched a veritable witch-hunt on named individuals based on nothing other than the word of an obviously deranged mass murderer who clearly enjoyed being at the center of attention. It is instructive in this regard to compare the Breivik case to the rather different behavior displayed by the mass media when dealing with another terrorist in Western Europe some months later, Mohammed Merah.

3 Replies to “Two Terrorists and a Double Standard”