That would be Geert Wilders. 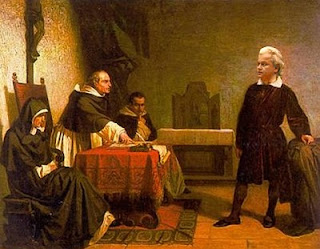 Here is a man who spends his life under armed guard. He has done so for years, and if you do a google image search of his name, there are very, very few candid snaps of this man who has managed to single-handedly demolish the idea that Australia is a free country.

Not when a man who is a legitimately elected member of an allied government and travels with police escort and private security is denied entry to Australia on because the Minister responsible for handing out visas drags his feet until too late.

Not when the government routinely provides visas for men who are happy to declare that muslims cannot be friends with Jews and Christians and apes, who believe that it’s scripturally okay to beat their wives and daughters, and that “whoever changes his religion should be killed.”

Not when our government allows people like Sheikh Hilaly to pronounce that women who don’t cover themselves deserve to be raped. Don’t give me crap about “context”, because an infidel man who attacked a woman and explained that it was his culture would be correctly charged for assault, where muslims who plead sharia cultural norms are given a pass.

Not when the outgoing Attorney General, fresh from declaring war on cigarette packets has now decided that saying things that might hurt someone’s feelings should be illegal. She’s behind the times – we already have the Blasphemy Laws, and even though they are rarely used, the chilling effect is such that what was normal table conversation in restaurants is whispered in loungerooms around the country.
You never know who might be listening, because your intent (even in a private conversation) is irrelevant. That some poor petal was upset is enough.

And now we come to Geert.

I awoke yesterday morning to the news that the Sydney venue for the Cavalcade of Kaffirs has cancelled the booking for him to speak.(It’s only the venue that was cancelled, not the talk, so no need to panic, Sydneysiders!)

I guess the thought that people may be “offended” enough to protest against him is too much. Especially when the threat is backed up by violence that everyone knows will be excused away on the basis of coming from a ‘small minority of extremists.’ It is unlikely that any offenders if caught will be prosecuted, and if they are then they will most likely be excused because they are really, really, really upset about Geert; he has insulted their particular belief system and they are enjoined to fight the unbelievers and those who ‘insult islam.’ 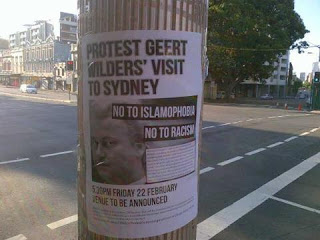 Remind me again how a book and a set of rulings get ‘insulted.’ I can tell you as a christian I get insulted and offended regularly about things said and done by other Christians, or by non-christians. A quick example – “Jesus is a prophet of islam.”

Um, no. Not to me, and not to most other people. He’s seen as the person that Christians call the Son of God, who is one third of the Holy Trinity. He may have been a prophet, but He wasn’t muslim and He isn’t muslim. To me that is blasphemous and offensive.

But now I’m being insensitive and I’m sure the Thought Police will track me down at some stage and charge me with hurting feelings.

We have come, now, to a place in time where the ANZAC spirit, the proud history of a young country is under siege. Too many years spent rolling over at the barked commands of the politically correct academe and media, not to mention lawmakers who have been working long and hard to break down our cultural norms in order for us to accept something we don’t like.

We know that if we speak freely we are courting trouble. If we complain about outrageous signs, or behaviour then we are expected to blame our own shortcomings rather than accept the possibility that some practices are just not compatible with our own behaviours.

We live in times when our elected representatives decline en masse an invitation to hear another elected dignitary speak of freedom – of speech, of association, of religion.

When universities that are happy to host groups like Hizb ut Tahrir, refuse to allow a man who travels with his own protection (even if it is supplied by the Dutch government and the sponsors who invited him here) to speak on their grounds, then there is no freedom of speech.

When a public meeting of the Q Society necessitates the reading of a lengthy introduction that reminds people of the laws we labour under, and that even though we believe the subject is in the public interest we can still be charged with ‘hate speech’ or causing offense. If people attend with the intention of being ‘offended’ they are free to leave at any time, and may consider themselves so advised.

And then we have Mr. Wilders. 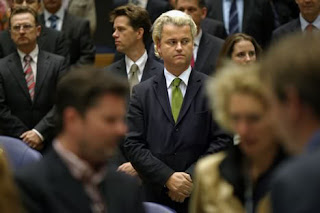 He is a man under siege, and in our so-called ‘free world’, our ‘democracies’ and our ‘most liveable cities’, nothing is more frightening to a lot of people than one man who speaks without fear or favour. One man taking the slings and arrows of his enemies and throwing them back, who lives under constant guard courtesy of numerous fatwas is so scary that he must be shut up at all costs.

So what does this lone politician from the Netherlands of all places, do that is so dangerous? The media have called him a hate-monger, the usual anarchist suspects want to disrupt his talks here and Hizb ut Tahrir want to debate him.

He speaks. He made a film, wrote a book.

And he is still only one man. In a cage built with bars of appeasement and tolerance and fear.

Because, for all the talk of ‘tiny minorities’, of ‘fringe extremists’, it only takes one man.

Geert is one man.

He will be giving 3 public talks in mid-February. One in Melbournistan, then one in Perth, and finally in Sydney.

I guess our ANZACs never realized they were fighting so that we could just sink into dhimmitude and debasement.

Regardless of the appalling morass that our current Government has sunk into, I had never before felt ashamed of my country.

That all changed yesterday.

For all his physical restrictions, for the perpetual shadow he lives under, he is freer than we are. He speaks his mind persistently and consistently. We know what his message is, and it is a clarion call. He has chosen his path and is walking it without complaint.

He is the last free man. 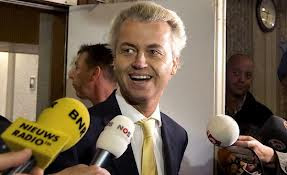 18 Replies to “The Last Free Man In Captivity.”