Magic Martin, our riot video guru, sends the following articles and video about the current situation in Egypt. Please also check the comments. Martin typically adds related videos there for those interested.

Chief of Egypt’s Army Warns of ‘Collapse’ as Chaos Mounts 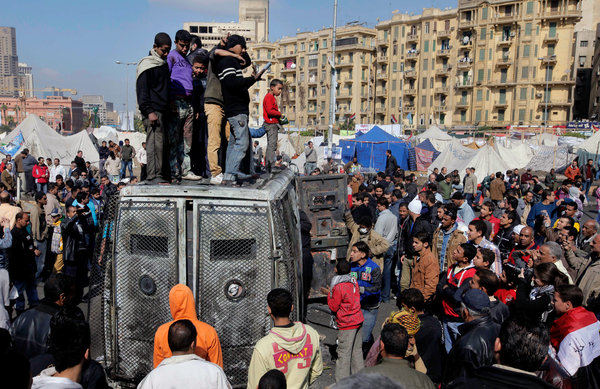 Egyptian protesters celebrated the capture and destruction of a state security armored vehicle on Tuesday in Tahrir Square in Cairo.

CAIRO — Egypt’s top military officer warned Tuesday of the potential “collapse of the state” if political forces in the country did not reconcile, reflecting growing impatience with the country’s growing unrest.

In a speech to military cadets that was distributed as a statement, Gen. Abdul-Fattah al-Sisi, the defense minister, publicly warned Egypt’s new Islamist leaders and their opponents that “their disagreement on running the affairs of the country may lead to the collapse of the state and threatens the future of the coming generations.” As such, General Sisi suggested, the polarization of the civilian politics was becoming a concern of the military because “to affect the stability of the state institutions is a dangerous matter that harms Egyptian national security.”