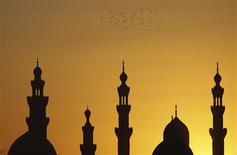 By Yasmine Saleh and Shaimaa Fayed

CAIRO (Reuters) – A constitution drafted by an Islamist-dominated assembly was approved by a majority of Egyptians in a referendum, rival camps said on Sunday, after a vote the opposition said drove a wedge through the Arab world’s most populous nation.

The Muslim Brotherhood, which propelled President Mohamed Mursi to power in a June election, said 64 percent of voters backed the charter after two rounds of voting that ended with a final ballot on Saturday. It cited an unofficial tally.

An opposition official also told Reuters their unofficial count showed the result was a “yes” vote.