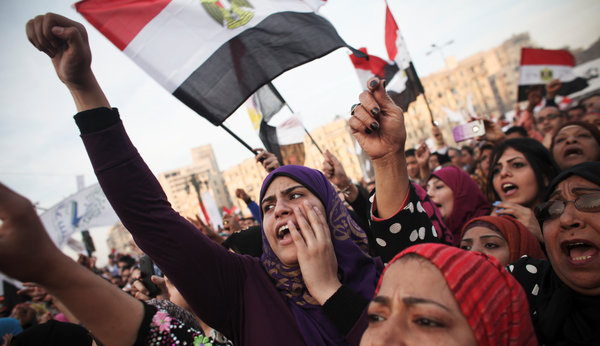 CAIRO — Large groups of protesters streamed toward the central Tahrir Square on Friday as opponents of President Mohamed Morsi, galvanized and angered by his unexpected and hurried effort to pass Egypt’s new constitution, sought to marshal large numbers of demonstrators for the second time in a week.

Protests Amid a Vote on Egypt’s Constitution

The protesters, including leftists, liberals and staunch opponents of Mr. Morsi and his party, the Muslim Brotherhood, have grown into an increasingly assertive opposition bloc in recent days, since Mr. Morsi issued an edict granting himself powers above any court.

On Tuesday, hundreds of thousands of the president’s opponents gathered in Tahrir Square here, denouncing Mr. Morsi as a new dictator and the Muslim Brotherhood as a secretive group, narrowly focused on its own survival.

“Egypt for all Egyptians!” protesters chanted on Friday.