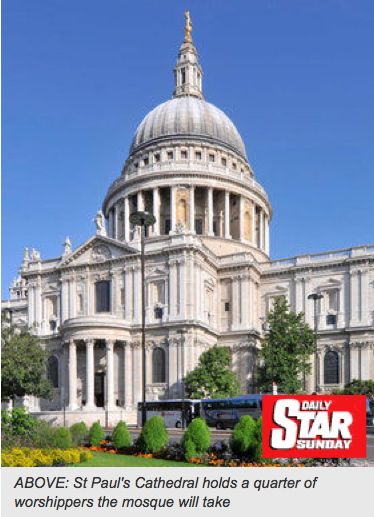 ABOVE: St Paul’s Cathedral holds a quarter of worshippers the mosque will take

BRITAIN could have its first Sharia-controlled zone if plans for a mega-mosque more than four times the size of St Paul’s Cathedral get the go-ahead.

The East London mosque, known as the Riverine Centre, will hold 9,312 worshippers, compared to 2,400 at St Paul’s.

But last night campaigners against the proposal claimed the application was a smokescreen for wider intentions to create a hardline Islamic enclave in the capital.

They also insisted facilities for the wider non-Muslim community in East London would be minimal and disguise Tablighi’s real aim to establish a global base.