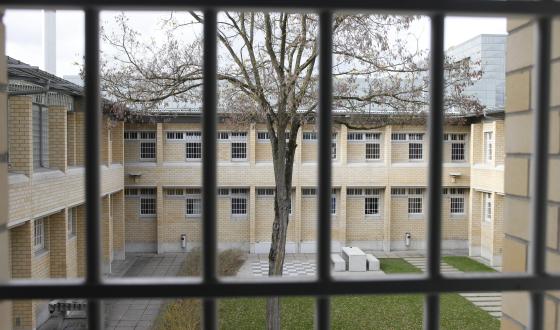 Also prisons in eastern Switzerland – showing the one at Frauenfeld, Thurgau – have to battle with unruly detainees from northern Africa.

Prisons in eastern Switzerland have huge problems with detainees of north african origin. They threaten and insult the staff – and sometimes even put pressure on fellow detainees who are ready to work.

Detainees from northern Africa are more prone to violence than others, and prison staff are more often being abused and insulted: This cry for help by Thomas Freytag, president of the prison association ‘Freiheitsentzug Schweiz’ [Swiss Imprisonment], broadcast via [state] Radio DRS, made wednesday’s headlines. The problems with inmates from countries like Tunesia, Morocco or Libya keep the staff on the go also in eastern swiss jails.

‘Detainees from northern african states are the most difficult group we have had to face so far’, according to Martin Vinzens, director of the St Gallen [canton, not city] penitentiary at Saxerriet, where about one tenth of the 120 inmates are from north Africa. It is especially problematic, according to Vinzens, when prisoners of the same origin join forces and appear in groups. The Saxerriet staff is constantly battling with the growing verbal aggression through north africans – even murder threats have been pronounced, according to Vinzens. But even apart from that, the north africans’ behavior causes major problems for prison staff: ‘There are also some exceptions. But in general, north africans appear often cheeky and demanding, especially when they are in groups’, specifies Martin Vinzens, mentioning an example: Many have the feeling they could sit out their sentence without having to work or to cooperate within the prison regime’s framework. Partially, they even tried to exert pressure on detainees who were ready to work. ‘We then need to get our point across to these people that we are not a service facility’, says Martin Vinzens.

Also at the Appenzell Ausserrhoden [canton bordering St Gallen] penal institution at Gmünden, as also at the attached canton prison, problems with north africans are a daily occurrence. Director Kurt Ulmann informs about verbal threats – ‘partially, they are massive’, says he. It is a concern for him that things will be talked out, in cases like this – ‘optimally, the inmate withdraws his threat. Otherwise, he may be dislocated to a different institution, or he may be reported.’ Kurt Ulmann shares Thomas Freytag’s (national prisons association) impression, according to which north africans are more difficult in the penal system than eastern europeans: ‘Often they are very demanding, and also very loud’, he states. Ulmann also reports about a north african detainee to be expelled sitting in the canton’s prison, who had set his cell on fire. In general, he states that lack of respect is a fact in today’s society – add to that the problems with north african detainees, and the staff’s work has become very exhausting. Ulmann is so much more thankful that the subject of intercultural exchange plays a big part during the staff’s education. ‘Presently, however, we don’t have the resources for special intense schoolings on north africans’, regrets Ulmann. His conclusion, given the present situation: ‘We would need more staff.’

At the Frauenfeld [Thurgau] canton prison, about a fifth of the 60 inmates are from the north african region. Stephan Felber, general secretary at the Departement für Justiz und Sicherheit [security]: ‘We have fewer problems with violence and threats towards our staff.’ One reason for it: A [central] police station is next to the prison and is called at an early stage, when a conflict initiates. Still, also those in the Thurgau canton do have their problems with north african inmates: ‘Partially, they just wish to consume benefits, and they treat the staff abolutely disrespectfully’, says Felber. The result of which is a sentiment of powerlessness with the prison’s employees. The thought might cross their minds where their own rights are, compared to the prison inmates’, according to Felber.

The Swiss Imprisonment president states a strong tendency among north africans detainees to inflict injuries on themselves. The staff at eastern swiss penitentiaries makes the same experience. Stephan Felber, general secretary of the Thurgau Justiz- und Sicherheitsdepartements: ‘It happens again and again that prisoners from northern Africa inflict injuries on thmselves, or that they threaten to do it.’ He is endorsed by Kurt Ulmann, Gmünden prison, Appenzell Ausserrhoden canton. ‘These self-inflicted injuries are certainly not life-threatening. But it is very wearing for our staff if someone cuts himself into his stomach or his arm and everything swims in blood’, says he. Martin Vinzens, director at the Saxerriet penitentiary, is also familiar with the self-inflicted injury subject. ‘Here at our instutiton, north africans do not act more conspicuously with regard to such things, than members of other cultural regions’, says he.

2 Replies to “North African prisoners, more difficult than the rest in Switzerland”