Today, unknown assailants have attacked two outspoken critics of Wahhabi/Salafist Islam in Kazan, capital of the Russian republic of Tatarstan. Valiulla Yakupov, Tatarstan’s Deputy Mufti, was shot and killed as he left his home, whilst elsewhere in the city the Chief Mufti himself – Ildus Fayzov – was seriously injured as a car bomb tore his vehicle apart. Although nobody has yet claimed responsibility for these attacks, it is a near certainty that they were perpetrated by Salafist militants, angered by the efforts of these two men to combat a growing trend towards Quranic literalism and the call for violent Jihad that has been gaining traction in the republic. It seems symbolic that the attacks took place upon the eve of Ramadan, as if emphasising that the attackers regarded them as false Muslims. 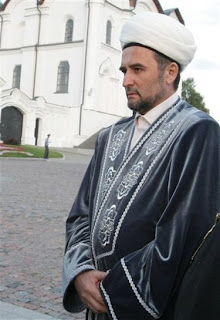 Izvestia reports that “Spetsnaz are conducting an operation to detain the presumed killers” and reveals some interesting background information on the two victims. Fayzov only took up his position in April 2011, succeeding Gusman Iskhakov who, according to “the unofficial version” was held to be “leading an insufficiently rigorous policy in relation the republic’s radical Islamists”, whereas Fayzov “took a hard-line and principled position on this question.” Fayzov and Yakupov in this respect were cast from the same mould, and shortly before his death, Yakupov told the paper that he was “alarmed at the growing influence of followers of radical currents of Islam amongst the republic’s Muslims.” He believed that these influences were primarily of foreign origin, stating: “Dozens of people go abroad, who then return to the republic and act as influential agents: actually recruiting new people and sending them abroad.”

(STRATFOR is reporting this as a “Wahhabi attack on these men)