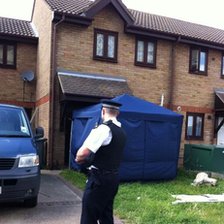 Five people from London have been charged with terrorism offences.

Those charged are Richard Dart, 29, from Ealing; Imran Mahmood, 21, from Northolt; Jahangir Alom, 26, from Stratford; and Ruksana Begum, 22, from Hoxton.

All five will appear at Westminster Magistrates’ Court on Thursday.

Four of those charged were arrested earlier in the month during a Metropolitan Police operation, while Mr Baqa was detained on Wednesday.

Mr Dart, Mr Mahmood and Mr Alom are charged that “between 25 July 2010 and 6 July 2012, with the intention of committing acts of terrorism or assisting another to commit such acts, engaged in conduct in preparation for giving effect to his intention”.