Beirut used to be called,  “The Paris of the East”. Well that is sort of true again actually as its hard to tell the two cities apart in some areas. But London seems well on it’s way to being “The Lahore of the West” 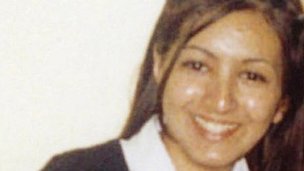 The mother of Shafilea Ahmed saw her husband attack her daughter on the night she disappeared, a court has heard.

Farzana Ahmed had previously denied seeing any attack on 11 September 2003 but has now changed her defence, the prosecution told Chester Crown Court.

Mrs Ahmed, 49, and her husband Iftikhar, 52, both deny murdering their daughter at their Warrington home.

Henry Riding, prosecuting, told the jury the new defence case statement contained an admission from Mrs Ahmed that an “incident of violence” towards Shafilea did occur.

She claims she tried to intervene but was “punched with a clenched fist” and went upstairs with the other children as she was “scared”.

She said she went back downstairs 20 minutes later and asked where Shafilea was.

She alleges Mr Ahmed replied: “If you care for your dear life and that of your children don’t ever ask me this question again.”