A 30-year-old woman and two of her children were beheaded overnight in Afghanistan’s east, police said, in what appeared to be the latest in a rapidly growing trend of so-called honour killings.

Police said they suspected the woman Serata’s divorced husband of barging into her house in the capital of Ghazni province and murdering her, alongside their eight-year-old son and nine-year-old daughter.

‘The children saw the killer take their mother’s head off, so he killed them too,’ a local policeman said, adding that the attacker had spared Sereta’s two-year-old daughter.

Activists say there has been a sharp rise in violent attacks on women in Afghanistan over the past year. 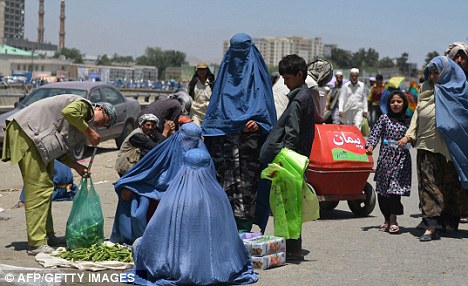 Beheaded: The situation for women in Afghanistan has worsened this year, according to activists

They blame President Hamid Karzai’s waning attention to women’s rights as his government prepares for the exit of most foreign troops in 2014 and seeks to negotiate with the Taliban, Afghanistan’s former Islamist rulers.

3 Replies to “Honour killing’ of mother, 30, beheaded by her ex-husband… who then decapitated their two young children because they’d watched”