ESSUNGA The first accomodation for so-called lone-coming refugee children
will now be made ready in Essunga municipality, and so the swedes there
will receive their moving orders. All in all, it will be six appartments
which will be converted into HVB-hem [home for care or living], for care and treatment of refugee children.

It is expected that the case will be treated at the local parliament in
autumn and that, if everything goes according to the plans, the
accomodation will open during 2013. The plan goes that ten lonecomers
will be accomodated at Essungabostäder’s [name of the Essunga social
housing company] six appartments on Clematisvägen, where now swedish
families live. However, presently only three of them are rented out.

Arbetsmarknadsenheten’s [labour market section] chief Håkan Olsson says to Nya
Lidköpings-Tidningen that today, Essunga is one in ten Västra Götaland
municipalities which does not accept so-called lone-coming refugee
children, and that there henceforth can be a law on this [so that they
will be obliged to accept them, I assume].

Benny and Eva Dahlberg live on Clematisvägen. They were called to the welfare department’s Ifo chief (individual and family care), Heino Kokko, where they were informed that they must move – a piece of news which they
describe as a cold shower. The house they live in with their children
will be transformed into a cafeteria for the new guests.

‘We have neatened everything here, and in autumn I will start my permanent
job at the municipality. If we need to move, then the municipality must
help us to find a new one’, demands Benny.

Kokko claims towards Nya Lidköpings-Tidningen that this is nothing like
giving orders, but that he is acting by order of the the municipality’s
leadership, and that two out of three Clematisvägen households have
accepted to move.

Olsson again says that the dwellers only had received an inquiry in order to
make way for the new accomodation, and he affirms that several of these
families already earlier had expressed wishes to leave the area. 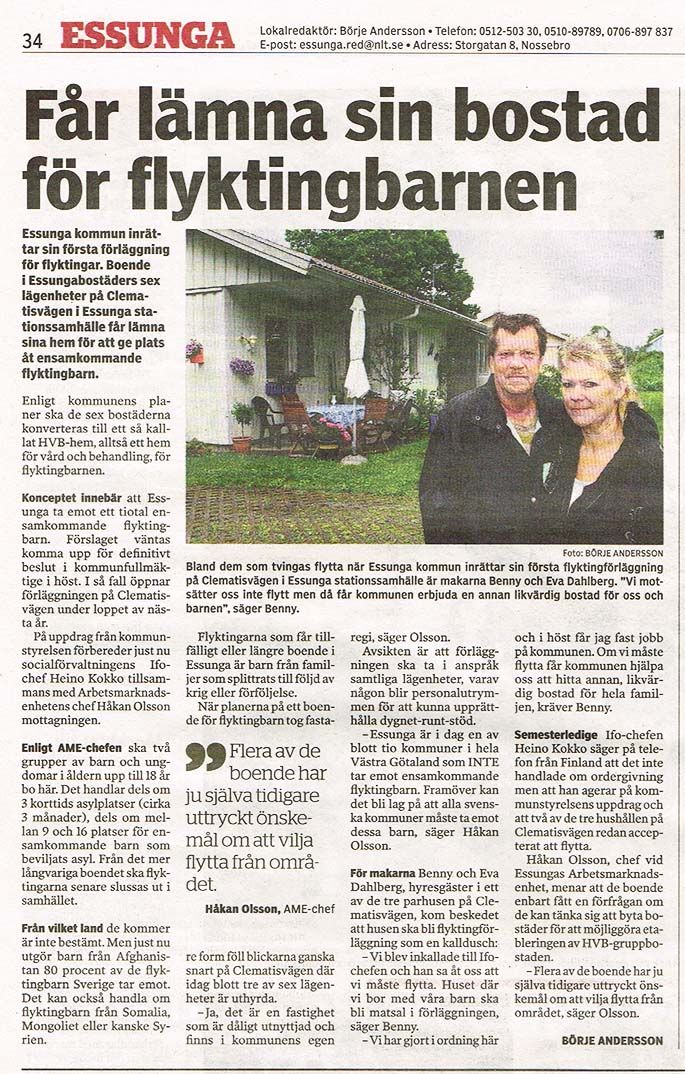 2 Replies to “More swedes must move for lonecomers”