A web page with a story about Muslims keeping a German slave was posted here and there and for some mysterious reason will not load at this time.

Fortunatly I happen to have had the tab already open:

Muslim slavery in the center of Europe

Several days ago, the world was shocked with the news from Europe. A family couple from Bosnia and Herzegovina had been keeping a young German woman as their slave for eight years. The victim of family violence is now 19 years of age.

The Bosnian couple – Milenko Marinkovic, 52, and his wife Slavojka Marinkovic, 45, – were torturing and starving an underage girl, whose name was Karla. The girl would be raped by other men on a regular basis.

It was the couple’s neighbors, who called the police. One of them said that he saw Marinkovic harnessing the girl to a cart and whipping her, as if she was a horse. The couple made the German woman come into unnatural relations with dogs – just out of sadism, Austrian portal unzensuriert.at said. The victim was kept indoors. The woman was not allowed to communicate with other people at all. She had to eat the fodder that her masters would give to their pigs.

It still remains unknown why the authorities did not take any measures against the Bosnian couple to save the German child eight years ago. It was said that the Bosnians hid the girl in the basement, and the police did not find her. This time, the authorities decided to act only after a neighbor filed a written statement against his neighbors and presented a photo of the exhausted and bruised young woman.

They were hiding the girl in a forest. When she was found, she weighed only 40 kilos. She currently stays in an orphanage, although her physical and psychological condition leaves much to be desired. The rehabilitation process will take a lot of time, medics said.

Karla was taken to Bosnia eight years ago. Her mother, a German citizen, had been married to Milenko Marinkovic in spite of the fact that the man already had a wife from Bosnia -Slavojka. Karla’s mother had a work permit in Germany and Austria. She left her daughter to the Bosnian man, and kept silence about the violence in the family.

This story received an extensive coverage in the European press. Many people – bloggers and journalists – started discussing the issue of Islamic slavery in the Mediterranean region. It is worthy of note that the above-mentioned family is known as the Marinkovics, but their cousin’s name is Mohammed Makalic.

Here is what a German blog dolomitengeistblog.wordpress.com had to say:

“Muslim slavery is still preserved up until today. Hundreds of thousands of men and women from the Philippines, Romania, India, Bulgaria, Nepal, Pakistan and Bangladesh are used as house slaves. They don’t pay them for their work, they treat them as dogs and feed them as they feed their pigs. Slaves can be raped and killed, if necessary.”

Official publications prefer not to expose the Muslim names of the slave owners. Slavic names are used instead. It’s true when they say that crime has no nationality. If so, why did they exhibit the Serbs as criminals in the midst of the war against Yugoslavia? The Serbs remained the primary war criminals after the war too.

However, honest journalists wrote during the war in the Balkans that it was not the Russian mafia or the Serbs that inundated Europe. According to them, Europe’s biggest mobsters were ethnic Albanians. They were involved in a variety of most serious crimes that man could commit – human, arms, drug trafficking, etc.

We are only left to wonder if Europe shows any political will to find a way out of the maze of geopolitics and crime.

Read the original in Russian:

Below the flap I will post screen grabs of the original. I pasted the text above in case anyone else wants it also. 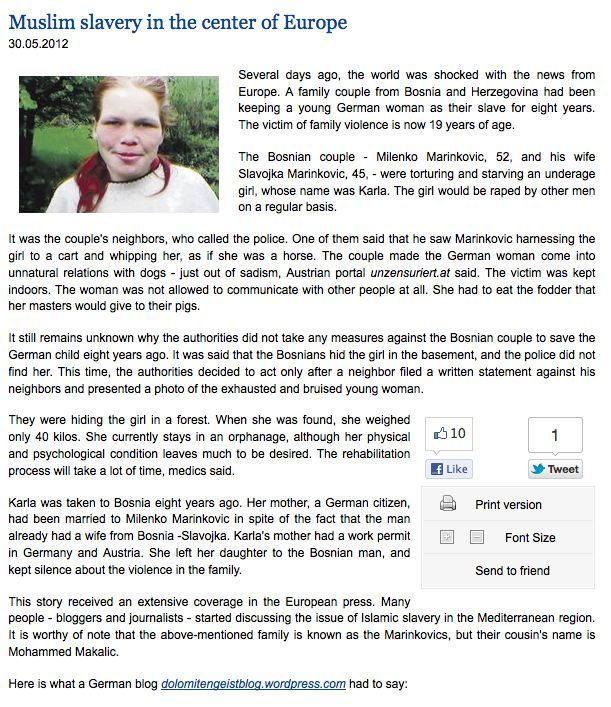 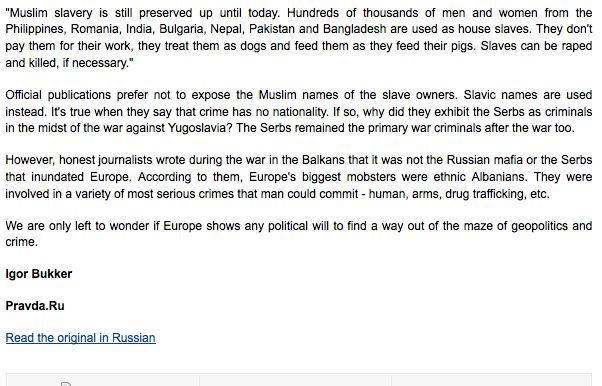 5 Replies to “Pravda article: “Muslim slavery in the heart of Europe” scrubbed from the net. Till now.”