From the careful wording in this article, it is safe to assume that all the violence came from U.A.F., the self titled, “anti-Fascists”, who as per usual show up wherever pro England marches take place. Wouldn’t it be nice if UK news could just state the facts and the truth as it actually is. But I suppose, if they did, there wouldn’t be any of these sorts of problems or need for bloggers.

Pictures have been released of five people wanted by police investigating violence which flared during a nationalist march and rally last month.

A 10-year-old girl and two police officers were injured after bottles were hurled at the fifth annual March for England gathering in Brighton, East Sussex.

Sussex Police said there was a “considerable level of violence” directed at the 140 marchers and attempts were made to block them at several points along the route.

Today, officers issued pictures of five people they want to question over the trouble. All are suspected of throwing bottles, cans or containers at police officers and crowds.

Mounted police were drafted in to maintain calm but Superintendent Steve Whitton said it was clear some people were intent on not protesting peacefully.

The three people arrested were all men who were not connected to the march. All were detained on suspicion of public order offences at separate points along the route.

Here is a picture released by police of 5 people of interest: 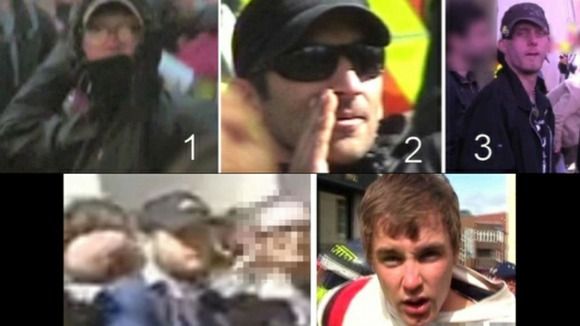 4 Replies to “Five wanted over violence at nationalist march”