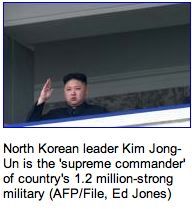 (AFP) – 19 hours ago
SEOUL — New satellite images show more work under way at North Korea’s nuclear test site but give no indication of when a test may occur, a US-based specialist website reported Saturday.
There is widespread speculation that the North may carry out another atomic weapons test — its third — following international criticism of a failed rocket launch on April 13.
The 38 North website carried satellite photos of the Punggye-ri site near the east coast, saying they seem to indicate that “the North Koreans are proceeding as if the test go-ahead decision has already been made.
“The imagery does not, however, give any indication of when that detonation may take place,” said the website, a project of the US-Korea Institute at Johns Hopkins School of Advanced International Studies.
It said the pictures taken by a private company on April 18 are the latest in a series showing continuing preparations for a test.
Photos taken on March 8 showed soil and other material excavated from the test tunnel. Overall, it said, thousands of tons of rubble have been excavated at the site covering 4,000 square metres (around one acre).
The latest imagery shows a train of mining carts on top of the soil piles and random unidentified structures or objects on or near the piles, 38 North said.