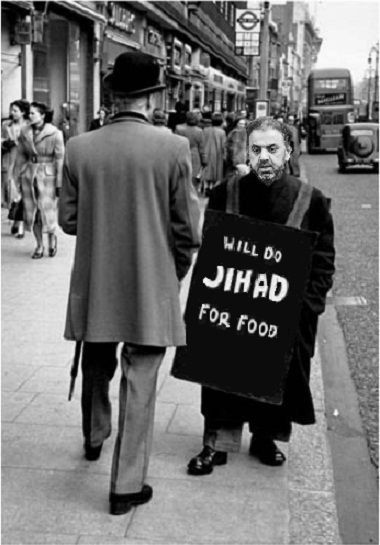 ‘Lord’ Ahmed, according to this MEMRI page, is offering just heaping piles of money for the ‘capture’ or assassination of prominent Americans and Europeans, namely George Bush and Tony Blair as well as Barry Soetoro Obama. Ahmed then denied having made this offer despite doing so to many newspapers and live on Pakistani TV, and frankly to anyone who would sit still long enough to let him finish.

So we know he lies to, well all of us once caught in his threats.

This does beg a few questions in my mind.

1. Why has he not been arrested and jailed? Surely this action breaks a dozen serious laws in the UK, not the least of which is conspiracy to murder.

2. Why is there not a for sale sign in front of his house already? Does he actually think that someone is going to try and ‘capture’ or kill one of these prominent and law abiding citizens and that ‘Lord’ Ahmed is going to suddenly impoverish himself and scrape his knees on the sidewalk to raise millions of dollars to fulfill his pledge? It outrages me that he would be able to make this offer with impunity, and stuns me to think that anyone might actually believe him and try and collect.

Ahmed is also the man who threatened to bring 10,000 rioting Muslims down on the British government if Lord Pearson was successful in his bid to have Geert Wilders speak to the house of Lords in 2009.

At least whoever does so, will indeed get what he deserves from Lord Ahmed.

That much I am sure of.

4 Replies to “Lord of lies. Ahmed Bullsh*ts everyone and gets clean away with it.”