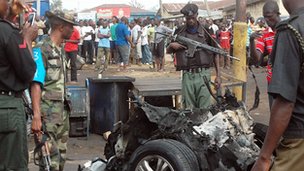 Several others were seriously injured in the attack and have been taken to hospital.

The death toll could be higher, with one official, Abubakar Zakari Adamu, telling the AP news agency 38 had died.

The blasts, which caused extensive damage, happened near restaurants, a hotel and two churches.

The area has been the scene of a religious conflict in recent years that has claimed hundreds of lives.

There had been warnings of attacks in the region over Easter.

Many of the dead are thought to be motorcycle taxi drivers and beggars.

Witnesses say debris was thrown dozens of metres from the centre of the blast.

Kaduna can be found on the dividing line between Nigeria’s largely Christian south and Muslim north.